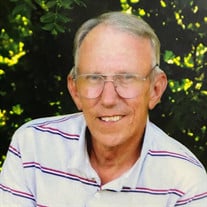 BLISSFIELD – Dennis “Keith” Arquette, 75, died early Thursday morning, October 8, 2020 at his home in Blissfield surrounded by his loving family and under the compassionate care of Hospice of Lenawee. Born October 13, 1944 in Morenci, Keith was the son of the late Emory and Gladys (Carncross) Arquette. He was a proud 1962 graduate of Morenci High School. On May 8, 1965 Keith married the love of his life, Karen Johnson, in Angola, IN. Keith was a career truck driver for over 30 years. He was also employed as a machinist, woodworker, and farmer. He was a true family man; putting his family before everything else. A true sports enthusiast, he was an avid Tigers, Lions, and Michigan football fan. Keith loved to play and coach baseball. He coached Little League in Blissfield for over 20 years and was inducted into Blissfield’s Hall of Fame. In his spare time, Keith found joy in the outdoors, hunting and fishing; and enjoyed woodworking. In addition to “the one he loved the most,” his wife of over 55 years, Karen, Keith is survived by his children, Kelly (Sam) Valdez of Adrian; and Kirk (Patricia) Arquette of Morenci; four grandchildren, Jessica (Josh) Thonnissen of Taylor, Josh (Megan) Valdez of Adrian, Chelsea (Drew) Lester of Blissfield, and Amanda (John) Cornelius of Adrian; 10 great-grandchildren; brother, Don Arquette of Sarasota, FL; and numerous nieces and nephews. In addition to his parents, Keith was preceded in death by three brothers and a sister in infancy. Friends will be received for a visitation on Sunday, October 11, 2020 from 2:00 to 4:00 P.M. at Wagley Funeral Home, Tagsold Chapel, Blissfield. There will be a private Celebration of Life at a later date. Following the Governor’s executive order, all attendees are required to wear a proper face covering, with the exception of those under the age of five years old or those who cannot medically tolerate. The family suggests that memorial contributions to honor Keith be made to Hospice of Lenawee. Online memories and condolences may be shared at www.WagleyFuneralHomes.com

The family of Dennis "Keith" Arquette created this Life Tributes page to make it easy to share your memories.

Send flowers to the Arquette family.