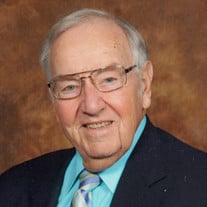 ADRIAN – Dearel “Dee” E. Jenkins, age 87 of Adrian, passed away Monday, February 13, 2017, at Arbor Hospice in Saline. He was born May 26, 1929, in Holloway, Michigan, to Carey and Tillie (Kapnick) Jenkins, and graduated from Adrian High School with the Class of 1946 During the Korean Conflict, he proudly served in the United States Air Force. On May 3, 1954, he married Nancy Howell in Adrian, and they were blessed with over 63 years together. Dee was the Director of Purchasing for Merillat Industries for 22 years. He then worked in purchasing at American Chain and Cable where he retired in 1991 with 14 years of service. In his retirement Dee continued working at Barrett’s, Braun (now Wagley) Funeral Home, and also as a bank courier. He attended Bethany Assembly Church. Dee’s favorite pastimes included wood carving, wood working, including furniture building, and tending his vegetable garden. In addition to his wife, Nancy, he is survived by their daughters, Cathy Jenkins of Adrian and Susan (Eugene) Ku-Miklovich of Saline; six grandchildren: Dr. Erica (Jesse) Still, Pastor Christina (Matthew) Ban, Benjamin (Gina) Ku, Coryanna (Bree) Ku, Justin (Abigail) Ku and Diana Ku-Brown; and eleven great grandchildren who lovingly referred to him as Papa Dee Dee. Besides his parents, he was preceded in death by his brother, Duane. Funeral services will take place at 11:00 a.m., Friday, February 17, 2017, at Bethany Assembly Church with Pastor Ron Sparks officiating. Burial will follow at Lenawee Hills Memorial Park in Adrian with military honors conducted by VFW Annis Fint Post #1584 and American Legion Post #97. Visitation will be held Thursday from 2:00 to 4:00 p.m. and 6:00 to 8:00 p.m. at Wagley Funeral Home. Contributions in memory of Dee are suggested to Christian Mission, Arbor Hospice at Saline or Lenawee Humane Society. Online condolences and memories may be shared at www.WagleyFuneralHome.com.

The family of Dearel "Dee" Jenkins created this Life Tributes page to make it easy to share your memories.

Send flowers to the Jenkins family.