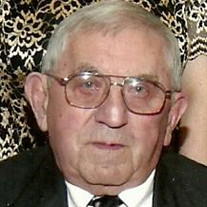 BLISSFIELD – Dean Frederick Neuman, 91, of Blissfield, passed away, Wednesday, May 24, 2017, at Blissfield Place under the care of Hospice of Lenawee. Born March 13, 1926 in Blissfield, he was the son of the late William and Esther (Stock) Neuman. On September 25, 1947, he married the former Helen “Louise” Staup, and she preceded him in death in April 2011. Dean was a United States Navy Veteran and proudly served his country during World War II in the South Pacific. Following his time in the service, Dean returned home to work for his father-in-law at Blissfield Lumber. In 1968, he purchased the business and was owner and operator until the age of 80. He retired in 2006. Dean was a hard worker throughout his life and truly loved to be around people. He was a member of the Blissfield American Legion; and was just named the longest term member. Dean enjoyed gardening in his free time. Dean is survived by his children, Roberta (James) Novak of Blissfield, Laura (James Wonacott) Neuman of Blissfield, and Fred (Kendra) Neuman of Tennessee; 4 grandchildren, Michael (Jeanine) Novak of Blissfield, Stacy (Mark) Pope of Manchester, MI, Joel (Theresia) Neuman of Blissfield, and Lisa Novak of Blissfield; 4 step-grandchildren; 5 great-grandchildren, Gibson and Garett Pope, Trey and Taber Neuman and Mila Novak; and 4 step-great-grandchildren. He was preceded in death by his parents; his wife, Louise Neuman; son, Bob Neuman, and siblings, Donald Neuman and Nancy Potter. At Dean’s request cremation has taken place. A memorial service to celebrate his life will take place on Thursday, June 1, 2017 at 11:00 a.m. at Wagley Funeral Home, Tagsold Chapel in Blissfield with Rev. Keith Smith officiating. Full military rites will be conducted. Visitation will be on Wednesday, May 31, from 3 to 8 p.m. at the funeral home. Private burial will take place in Pleasant View Cemetery. The family suggests memorial contributions be made to the Blissfield Fire Fighter’s Association or Hospice of Lenawee. Online condolences and memories may be shared at www.wagleyfuneralhome.com.

BLISSFIELD &#8211; Dean Frederick Neuman, 91, of Blissfield, passed away, Wednesday, May 24, 2017, at Blissfield Place under the care of Hospice of Lenawee. Born March 13, 1926 in Blissfield, he was the son of the late William and Esther (Stock)... View Obituary & Service Information

The family of Dean F. Neuman created this Life Tributes page to make it easy to share your memories.

Send flowers to the Neuman family.