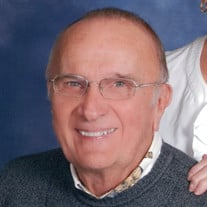 ADRIAN – David L. Wakefield, age 83 of Adrian, passed away Sunday, March 31, 2019, at Tecumseh Place. David was born June 3, 1935, in St. Johns, Michigan, the son of Paul and Cressie (Matthews) Wakefield. During the Korean Conflict, he served in the United States Army. David graduated from Michigan State University with a Bachelor’s Degree in Mass Communications. On September 7, 1957, David married Josephine Woodbury, and she survives. After a brief stint as a sports broadcaster for WTOM-TV in Cheboygan, David moved to Adrian to work as an adjustor with S.E. Mutual Insurance Company and later State Farm Fire and Casualty Company, where he retired in 1997. David was an active and energetic member of the Adrian Kiwanis Club, working on countless projects and committees. He not only served as Kiwanis President, he was honored as Kiwanian of the Year in 1979 and became an Adrian Kiwanis Hixson Fellow in 2013. David delighted in emceeing the area Special Olympics for over 20 years. He was a member of the Adrian First United Methodist Church. His favorite past times included traveling, fishing, golfing and playing cards. David treasured his grandchildren and spent many happy hours with Jo traveling to their events and being their greatest fans. In addition to Jo, his devoted wife of over 61 years, he is survived by their children: Patrick (Cyndi) Wakefield of Knoxville, TN, Jill Clark (Rob) of Tecumseh, Amy Keck of Adrian; son-in-law, Doug George of Defiance; brother, Dean (Karen) Wakefield of Sacramento, CA; ten grandchildren: Chan (Ashley), Tyler (Blair), Ryan, Paul (Ria), Quinn (Des), Evyn, Abi, Reid, Gabriele (Dylan), and Madeline; and five great grandchildren: Oaklyn, Bryn, Hugh, Caroline and Henry. Besides his parents, he was preceded in death by a daughter, Dawn George. Funeral services will take place at 11 a.m., Saturday, April 6, 2019, at Wagley Funeral Home with Reverends Drew Hart, Christopher Brundage and Linda Farley officiating and military honors conducted by VFW Annis Fint Post #1584 and American Legion Post #97. Visitation will be held at the funeral home Friday from 3 to 7 p.m. Contributions in memory of David are suggested to First United Methodist Church or Hospice of Lenawee. Online memories and condolences may be shared at www.WagleyFuneralHomes.com.

The family of David L. Wakefield created this Life Tributes page to make it easy to share your memories.

Send flowers to the Wakefield family.