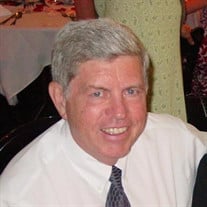 ADRIAN- David Robert Siler, Jr., 79, of Adrian Township, passed away at home on August 1, 2020, following a lengthy illness. Born October 27, 1940, in Monroe, Michigan, to David and Mary (Walters) Siler, Sr., he was valedictorian of Madison High School’s very first graduating class. David was a proud graduate of the University of Michigan, where he studied architecture. He married Carolyn Marsai August 29, 1964; they have three daughters. Following a 5-year apprenticeship with Ralph R. Calder in Detroit, David moved his family to Adrian in 1969, working for Francis Faulhaber before founding his own firm. In 1988, David and attorney Dan Bruggeman purchased and restored Adrian Engine House #1. He later worked to secure a Michigan Historical Marker for the structure. From the second-floor office of Siler Associates Architects, Inc., David would show interested visitors the fun of sliding down the fire pole. He designed prominent buildings in and around Lenawee County for more than four decades. David was notably civic-minded and designed the original Maple leaf logo for the City of Adrian. An active member of the Adrian Kiwanis Club for over 40 years, he worked on the Kiwanis High-Rise, annual pancake breakfasts, radio auctions, antique shows, and toy drives. In more recent years he co-founded and managed the Avenue of the Flags project with fellow Kiwanian Larry Stephan, and was instrumental in the planning, design, and expansion of Kiwanis Trail. He was very proud that the Club continues these legacy projects. David played the piano for Club meetings, wrote Adrian’s weekly Kiwanis Bulletin, and created the Club’s annual calendars for decades. He served as Club President 1977-78 and was named Kiwanian of the Year twice, first in 1983, then 2013-14. The flag on the Kiwanis Trail at Bent Oak Crossing was dedicated in his honor. Over the years, David was active in many other area institutions. He was a Trustee Emeritus of Siena Heights University. A classical music buff, he served as Adrian Symphony Orchestra Board President in 2001-2002, a member through 2013, and as chairman of the 2015 Music Director search. David and Carolyn also inspired the Adrian DDA to establish “Opera Up Town” in 2013. He played clarinet in the Adrian City Band alongside his daughters in the 1980s. He remained loyal to his Madison School roots, volunteering with its HOSTS (Help One Student to Succeed) Mentoring program and helping the school develop its facilities, notably the Madison Performing Arts Center. A longtime member of the Lenawee Country Club, David was an avid golfer. He was passionate about music, history, and University of Michigan athletics. He tackled many DIY projects and became a backyard orchardist. He loved pie, owned countless neckties, and enjoyed driving two different convertibles, one at the beginning of his years in Adrian, and one near the end. He always kept a positive outlook and had a lively sense of humor, evidenced by hilarious song parodies written for Kiwanis functions and memorably silly dad jokes. He was a loving husband and father who enjoyed travel, including family getaways to the Great Smoky Mountains, a cottage in Michigan’s Leelenau Penninsula, Arizona; and later, trips with Carolyn to the Yucatan, Australia, and Italy. David is survived by his wife, Carolyn, of Adrian Township, daughters Lisa (Jeffrey) Hoenig of Superior Township, Cheryl (Andrew) Hall of Boulder, CO, and Amy (David) Sellars of Ridgewood, NJ, grandchildren Ronan and Miranda Sellars, and Trevor Hall, sister Katherine Siler of Phoenix, AZ, and brother Mitchell (Ruth) Siler of Columbus, OH. A private burial will be held at Lenawee Hills Memorial Park with Pastor Greg Burdine officiating. A Celebration of Life will be held at a later date. All arrangements have been entrusted to Wagley Funeral Home, Adrian. In lieu of flowers, the family encourages memorial donations to Hospice of Lenawee, Habitat for Humanity, the Adrian Symphony Orchestra, or the Lenawee Historical Society. Online memories and condolences may be shared at www.wagleyfuneralhomes.com.

The family of David Robert Siler Jr. created this Life Tributes page to make it easy to share your memories.

Send flowers to the Siler family.