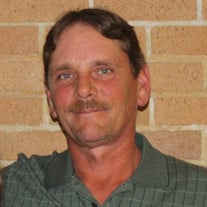 DEERFIELD – Danny T. MacBeth, age 54 of Deerfield, passed away Tuesday, October 25, 2016 at University of Toledo Medical Center. He was born November 28, 1961, in Adrian, Michigan to Thomas and Joyce (Anthony) MacBeth. On November 8, 1986, Danny married Tanya Hickman and she preceded him in death in 2013, having enjoyed 26 years together. Danny was a Jack of all trades who enjoyed working on his ’66 Chevelle, growing and preserving his own food, and loud music. He was currently working for the Lenawee County Road Commission. Danny will be greatly missed by his family including his mother, Joyce; children, Tommy of Clarkston, RaeLynne and Matthew of Deerfield; his siblings, Debra (Rick) Nearhood of Blissfield, Diane Kastel of Riga, Douglas MacBeth of Adrian, Darlene (Chad) Winchel and Darcie (Mike) Uckele, both of Blissfield and many nieces and nephews. In addition to his wife, Tanya, he was preceded in death by his father, Thomas. Funeral services will take place at 3:30 p.m., Saturday, October 29, 2016 at Wagley Funeral Home, Tagsold Chapel in Blissfield. Burial will follow at Riga Cemetery. Visitation will be held at the funeral home Friday from 2 to 4 p.m. and 6 to 8 p.m. Contributions in memory of Danny are suggested to his family for his children’s education. Online condolences and memories may be shared at www.WagleyFuneralHome.com.

The family of Danny T. MacBeth created this Life Tributes page to make it easy to share your memories.