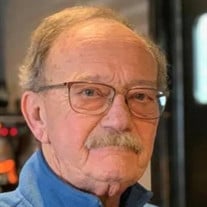 ADRIAN – Danny R. Hooker, age 72 of Adrian, passed away Monday, May 10, 2021, at his home surrounded by the family he dearly loved. He was born January 22, 1949, the son of Everett and Nellie (Rakes) Hooker. Danny graduated from Madison High School in 1967, and furthered his education at Siena Heights where he earned a Bachelor’s Degree. During the Vietnam War, he proudly served in the United States Army. In eighth grade Danny started going with Linda Cook whom he married February 8, 1969. This love story included celebrating over 52 years together, two children and four grandchildren. Danny retired from Chrysler with over 38 years of service at the Chelsea Proving Grounds. He had many loves, Jack on the rocks, casinos and golf. He was a member of the Lenawee Country Club and enjoyed playing in tournaments. His love of the golf course made him the perfect groundskeeper in a few of his retirement years. But his greatest joy was his love of his family, especially his grandchildren. In addition to his wife, Linda, he is survived by their children, Dr. Toby (Stephanie) Hooker of Salt Lake City, Utah and Tanya (Eric) Smith of Adrian; grandchildren, Aiden, Parker, Stella and Everett; and siblings, Shirley (Roger) Summers, Janet (Jimmie) Mitchell, Michael (Janet) Hooker and Kevin (Scott) Hooker. Besides his parents, he was preceded in death by brothers, Kenneth and Larry Hooker. Funeral services will take place at 10:00 a.m., Friday, May 14, 2021, at Wagley Funeral Home with Faith Hagen officiating and military honors conducted by VFW Annis-Fint Post #1584 and American Legion Post #97. Burial will follow at Lenawee Hills Memorial Park, Adrian. Visitation will be held at the funeral home Thursday from 4 to 8 p.m. Contributions in memory of Danny are suggested to Hospice of Lenawee. Online memories and condolences may be shared at www.WagleyFuneralHomes.com.

ADRIAN &#8211; Danny R. Hooker, age 72 of Adrian, passed away Monday, May 10, 2021, at his home surrounded by the family he dearly loved. He was born January 22, 1949, the son of Everett and Nellie (Rakes) Hooker. Danny graduated from Madison... View Obituary & Service Information

The family of Danny R. Hooker created this Life Tributes page to make it easy to share your memories.

Send flowers to the Hooker family.