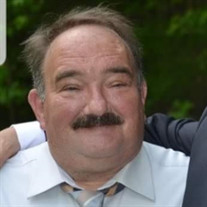 TECUMSEH- Daniel Frederick Bridge age 57, of Tecumseh, passed away at his home on Friday, December 6, 2019, following a brief illness. Born on December 20, 1961, in Boston, Massachusetts, Daniel was the oldest child of Melvin G. and Constance A. (Murtaugh) Bridge. He graduated from Temple Christian High School in Detroit, and went on to attend Asbury University and Eastern Michigan University. Daniel retired in 2018, from Milan’s Federal Correctional Institution after 20 years of service as a correctional officer. Daniel’s artistic talent was an important part of his life as he enjoyed creating religious based puppet shows in his teen years and was involved with the stage crew and acting programs while at college. His hobbies included cooking, writing and traveling. Daniel was a member of the VFW Auxiliary in Tecumseh and Kiwanis. He is survived by his mother, Connie Bridge of Tecumseh; his father, Melvin Bridge of Groton, VT; siblings, George Bridge of Somerset, MI, John (Ahna) Bridge of Hillsborough, NC and Cathy (Ron) Bridge Whited of Garden City, KS; sister-in-law, Kelly Bridge of Henderson, NC; nieces and nephews, Christine, Ashley, Daniel Ray, Bryan and Faith; and his special fur baby, Major. Daniel was preceded in death by his grandparents. Funeral services for Daniel will be held on Thursday, December 12, 2019, at 11 a.m. at Wagley Funeral Home with Majors Tom and Barbara Duperee, officiating. Visitation will take place on Wednesday, December 11, 2019, from 4 to 8 p.m. at the funeral home and one hour prior to the start of service. Contributions in memory of Daniel may be made to the Salvation Army of Adrian. Condolences and memories may be shared at www.WagleyFunealHomes.com.

TECUMSEH- Daniel Frederick Bridge age 57, of Tecumseh, passed away at his home on Friday, December 6, 2019, following a brief illness. Born on December 20, 1961, in Boston, Massachusetts, Daniel was the oldest child of Melvin G. and Constance... View Obituary & Service Information

The family of Daniel Frederick Bridge created this Life Tributes page to make it easy to share your memories.

Send flowers to the Bridge family.