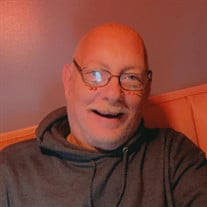 PALMYRA – Daniel L. Beckey, age 60 of Palmyra, died at his home Friday, December 17, 2021. He was born October 2, 1961, in Adrian, the son of the late Stanley and Nina (Byrd) Beckey, and graduated from Blissfield High School. On May 8, 1999, he married Barbara Schrock, and she survives. Dan was a member of the Palmyra Presbyterian Church. He drove tow truck, worked auctions, and held several other odd jobs. He was very involved with the Blissfield Parade of Lights and was well-known for designing and decorating elaborate floats. In addition to Barbara, his wife of 22 years, he is survived by their children, Jessica (Ben) Schall, Alexa Beckey and Thomas (Carrie) Savickas; siblings Stanley (Tina) Beckey and Caryn (Troy) James-Bechtel, sister-in-law, Sue Ellen (Michael) Sheldon; and several grandchildren, nieces and nephews. Besides his parents he was preceded in death by a brother, Robert Beckey. Funeral services will take place at 2 p.m., Thursday, December 23, 2021, at Wagley Funeral Home, Tagsold Chapel in Blissfield with Pastor Douglas Holmes and Michael Sheldon officiating. Burial will follow at Palmyra Cemetery. Visitation will be held at the funeral home Thursday from 11 a.m. until the service. The family would like to thank the Palmyra Fire Department and Chief Paul Rohlan for all the kind assistance. Online condolences and memories may be shared at www.WagleyFuneralHomes.com.

The family of Daniel L. Beckey created this Life Tributes page to make it easy to share your memories.

Send flowers to the Beckey family.