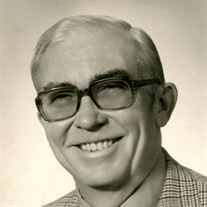 Adrian—Dallas Maxwell Bowen, 92, of Adrian, passed away Wednesday, November 15, 2017, at home surrounded by his loving family. He was born November 24, 1924, in Sand Creek, Michigan to Frank N. and Clara B. (McLouth) Bowen. After graduating from high school, he proudly served in the United States Army from 1943-1945, including involvement at the Battle of the Bulge. Dallas married Helen Leona Vogel on February 26, 1949, in Adrian, Michigan, and they celebrated 67 years together before her passing in 2016. Dallas worked for Consumers Power for many years, retiring as head store keeper. He always enjoyed being outdoors whether it was hunting, fishing, camping with his family, helping with Little League when his son was young, riding motorcycles with Helen, or doing yardwork and gardening. He is survived by his son, Michael D. Bowen, of Adrian; and many nieces and nephews. In addition to his parents and wife, he was preceded in death by his daughter, Janice and siblings, Clarice M. Berley and Dale R. Bowen. Funeral services for Dallas will be at 1 p.m. Tuesday, November 21, 2017, at Wagley Funeral Home with Rev. Larry Betz officiating. Burial will follow at Lenawee Hills Memorial Park, in Adrian. Visitation will take place at the funeral home from 11 a.m. until the time of service. In lieu of flowers, memorial contributions may be made to Hospice of Lenawee. Online condolences and memories may be shared at www.WagleyFuneralHome.com.

Adrian&#8212;Dallas Maxwell Bowen, 92, of Adrian, passed away Wednesday, November 15, 2017, at home surrounded by his loving family. He was born November 24, 1924, in Sand Creek, Michigan to Frank N. and Clara B. (McLouth) Bowen. After graduating... View Obituary & Service Information

The family of Dallas Maxwell Bowen created this Life Tributes page to make it easy to share your memories.

Send flowers to the Bowen family.