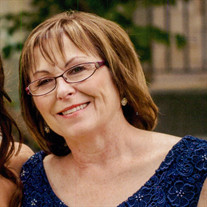 Connie J. Gentner (Richard), 61, of Manitou Beach, passed into eternity October 9, 2017. She was born December 3, 1955, in Adrian, to Barbara (Shaneour) and Charles “Bud” Richard. Connie graduated from Adrian High School with the Class of 1975, and on October 10, 1975, married her high school sweetheart, Brian Gentner. Connie loved children and observing their development. Her passion turned her towards teaching in early childhood where she was certified through CMTE of NY. Connie owned daycares in her homes and later taught at Montessori Children’s House of Adrian, Jack & Jill Learning Center and Annie’s Children Center of Ann Arbor. She enjoyed not only working with children, but the parents too. She had a special relationship with the staff which made going to work fun and purposeful. She is survived by her husband, Brian J. Gentner, children, Breanne M. Gentner of Phoenix, Sarah R. O’Neill (Gentner) & Scott of Chicago and Erika L. Gentner of St Joseph; and her grandson, Bryson Charles O’Neill, her bright shining star. Also surviving are her parents, Charles “Bud” R. Richard & Diane of Manitou Beach; brothers, Keith C. Richard & Tracy of Adrian, John Morey of Manitou Beach, Jeff Morey & Lisa of Jackson; sister, Jen & Josh Baker of Okemos; and many treasured nieces and nephews. She was preceded in death by her mother, Barbara Shaneour Richard Sanborn. A special thank you to her prayer team and angels on earth. Connie looks forward to seeing each and every one of her family and friends at the Tree of Life! A Celebration of Life gathering will take place from 1 to 4 p.m., Sunday, October 15, 2017, at Lenawee Country Club. In lieu of flowers, contributions in memory of Connie are suggested to St. Jude Children’s Hospital. Arrangements have been entrusted to Wagley Funeral Home where online condolences and memories may be shared at www.WagleyFuneralHome.com.

The family of Connie J. Gentner created this Life Tributes page to make it easy to share your memories.

Send flowers to the Gentner family.