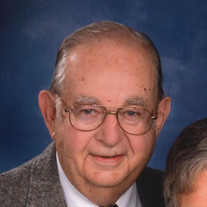 FAYETTE, OH – Colenzo Jay Short, age 86, of Fayette, died peacefully early Friday morning, October 15, 2021, surrounded by his family. He was born November 29, 1934, at home in Pettisville to the late Harold and Ruth (Grieser) Short. After moving to Fayette, Colenzo attended Gorham-Fayette Schools, where he graduated from in 1952; he was happy to call Fayette home ever since. Colenzo proudly served his country as a member of the United States Army Reserves. After meeting the former Joy Hesselschwardt at a dance, he quickly fell in love—and the rest is history. They married on May 30, 1958, in Delaware Bend, OH. Colenzo held in high regard the value of hard work. He learned the trade of woodworking and cabinetry while he was employed for twelve years at the former Leininger Home Supply in Elmira. Possessing an entrepreneurial spirit, he then took a risk to go out on his own, and became the sole owner and operator of Short’s Cabinet Shop in Fayette, which yielded him much success for over 40 years. His meticulous and quality craftsmanship is displayed in hundreds of kitchens and bathrooms in Northwest Ohio and Southeast Michigan. At the same time, he also worked as an independent licensed real estate agent and sold aluminum frame windows. Never idle, Colenzo spent his spare time maintaining his yard and working around the home. Colenzo proudly built his family home where he and Joy raised their children and made countless memories over the years as the family grew. His talent at woodworking was expressed in treasured keepsakes he personally crafted for each member of his family. Our Lady of Mercy Catholic Church in Fayette was Colenzo and Joy’s Church family. Colenzo was a member of the Gorham-Fayette Volunteer Fire Department for over 25 years, and served as a respected member of the Gorham-Fayette School Board in the 1970’s. He loved to travel and was blessed to have visited each state in the Union as well as extensive traveling in Western Europe. For the past 10 years, Colenzo enjoyed each winter with his bride at South Padre Island, TX. Colenzo will be sorely missed for his loving nature, his wisdom and sensible advice, and his quick-witted sense of humor. Surviving in addition to his wife of over 63 years, Joy, are three children, Jerry (Linda) Short of Fayette, Jon (Judi) Short of Antwerp, OH, and Julie Schumacher of Cincinnati; a daughter-in-law, Brigid Short of Cincinnati; two sisters, Shirley (Larry) Stuckey and Connie Short both of Archbold; seven grandchildren, Kyle (Mandy), Kurt (Nicole), Kody, TJ (Erin), Sierra (Anthony), Peyton, and Alexandra; a step-grandson, Alex; four great-grandchildren, Scarlett, Mercy, Ryker, and Tate; and a soon-to-be great-granddaughter, Amara; and a step- great granddaughter, Nyara. Preceding Colenzo in death were his parents; two sons, Terry and Jeffrey Short; a brother, Harold Short, Jr.; and a son-in-law, Mark Schumacher. The family will receive friends for visitation on Monday, October 18, 2021, from 4-8 p.m. at the Family Life Center on the campus of the Fayette United Methodist Church; and again one hour before the service. A funeral service will be held on Tuesday, October 19, at 11:00 a.m., also at the Family Life Center, with Father Stephen Stanbery officiating. Rite of Committal will follow in Pleasant View Union Cemetery in Fayette. Memorial Contributions in honor of Colenzo are suggested to the Fayette Volunteer Fire Department Association, Our Lady of Mercy Church, or the Family Life Center. Arrangements were entrusted to Wagley Funeral Home, Adrian, Michigan. Online condolences and memories may be shared at www.WagleyFuneralHomes.com.

The family of Colenzo Jay Short created this Life Tributes page to make it easy to share your memories.

Send flowers to the Short family.