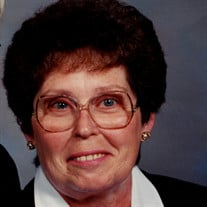 BLISSFIELD—Clarabelle Lucille Sinclair, 88, of Blissfield, passed away early Friday morning, September 22, 2017, at Blissfield Place. Born March 5, 1929, in Toledo, OH she was the daughter of the late Oakley and Harriet (Broadhead) Wilson. On July 1, 1962, she married Robert Sinclair at St. Paul’s Lutheran Church in Blissfield, and he survives. Clarabelle was a graduate of Blissfield High School. She was a devoted homemaker, and loved raising her five children. Clarabelle was a member of St. Paul’s Lutheran Church in Blissfield, prior to that she was attended the Methodist Church. She was active in the Deborah Circle at St. Paul’s, and at one time held an officer position. She enjoyed collecting Fenton Glassware and truly enjoyed gardening, flowers, and birds. Clarabelle truly loved being a grandmother. In addition to her husband of 55 years, Robert Sinclair, she is survived by her five children, Ronald (Brenda) Andrews of Ridgeway, Michael (Kim) Andrews of Greenville, Robert (Julie) Sinclair of Tecumseh, Mark (Diann) Sinclair of Granger, IN, and Gail (Thomas) Yarger of Blissfield; brother, Charles (Connie) Wilson of Blissfield; 13 grandchildren; 14 great-grandchildren; and numerous cousins in the Belding, MI area. Clarabelle was preceded in death by her parents; her first husband, Gerald Andrews in April 1959; and her step-father, Carl Albin. Funeral services for Clarabelle will be 10:30 a.m., Tuesday, September 26, 2017, at St. Paul’s Lutheran Church in Blissfield with Rev. Gary Leking officiating. Burial will follow at Pleasant View Cemetery. Visitation will take place on Monday, September 25, 2017 from 2-4 and 6-8 p.m. at Wagley Funeral Home, Tagsold Chapel in Blissfield and again on Tuesday at the church from 9:30 a.m. until the time of the service. Memorial contributions may be made to St. Paul’s Lutheran Church in Blissfield. Online condolences and memories may be shared at www.WagleyFuneralHome.com.

The family of Clarabelle L. Sinclair created this Life Tributes page to make it easy to share your memories.