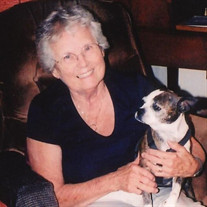 ADRIAN- Charlotte Elaine Reinhart made the Joyous Leap and returned to her God on Sunday, September 27, 2020, at her home at Gaslight Village Assisted Living in Adrian. Charlotte was born April 8, 1924, in Canton, IL, the sixth child of Omer and Cassie (Thomas) Reffett. On June 14, 1942, she married Walter F. Reinhart. They were married 65 years before his death on December 7, 2007. Charlotte and Walter started married life in Peoria, IL, and moved to Niles, MI in 1957. Upon retirement in 2002, they moved to Youngsville, LA and Charlotte moved to Adrian in 2011. In Niles, Charlotte was a founder and teacher of the Presbyterian Nursery School. She taught hundreds of children to share, not eat paste, don’t put that up your nose, and color in the lines. Charlotte was a woman of strong convictions and opinions, although she rarely spoke those opinions out loud. As a child of the Depression, she would loathe to part with any possession, valued or worthless, burdening her children with mounds of trinkets and tchotchkes. She was an adventurous and excellent cook, spending many happy hours reading cookbooks like a fine novel. She passed her love of tinkering in the kitchen to her daughters. Her beloved recipe for Raisin Bars is a family legend. She excelled in entertaining and often hosted happy hour, and her love of wine and bourbon (drank separately) was known by all. Charlotte was a collector of antiques, purchasing many of them brand new (see above “loathe to part with any possession”). Charlotte loved her pets dearly, often thinking of them as her “furry children.” Especially beloved were her dogs, Tammy, Bob, Pooh and Butch. She was a woman of strong faith and was a devout member of several congregations, including First Presbyterian Church in Niles, MI, Grace Presbyterian in Lafayette, LA, and First United Methodist Church in Adrian. Charlotte is preceded in death by her parents; her brothers, Damon, Aubrey, Omer Howard, and Eugene “Beanie” Reffett; and her sister, Bernita Murphy. She is survived by her children, Cassie (Larry Goldblatt) Goldstein of Indianapolis, IN, Denise (George) Small of Ruston, LA, Char-Lene (Richard) Wilkins of Adrian, and Reffett (Becky) Reinhart of Holland, MI. Also surviving are ten grandchildren, and fourteen great-grandchildren. “Remember that I have commanded you to be determined and confident! Do not be afraid or discouraged for I the Lord your God am with you wherever you go.” ~ Joshua 1:9 In accordance with Charlotte’s final wishes, cremation will take place. The family is planning a memorial service at a later date. Arrangements were entrusted to the care of Wagley Funeral Home, Adrian. Online memories and condolences may be shared at www.WagleyFuneralHomes.com

ADRIAN- Charlotte Elaine Reinhart made the Joyous Leap and returned to her God on Sunday, September 27, 2020, at her home at Gaslight Village Assisted Living in Adrian. Charlotte was born April 8, 1924, in Canton, IL, the sixth child of Omer... View Obituary & Service Information

The family of Charlotte Elaine Reinhart created this Life Tributes page to make it easy to share your memories.

ADRIAN- Charlotte Elaine Reinhart made the Joyous Leap and returned...

Send flowers to the Reinhart family.