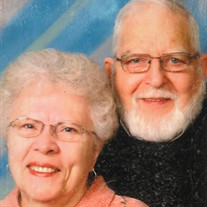 BLISSFIELD – Charles E. Wilson, 87, of Blissfield died early Tuesday morning, March 30, 2021 at Ebeid Hospice Residence in Sylvania, Ohio with his wife by his side. Charlie was born on December 2, 1933 in a log cabin on the outskirts of Blissfield, the son of Oakley and Harriet (Broadhead) Wilson. He graduated from Blissfield High School in 1951 and went on to serve his country in the United States Army from 1954 to 1956. Charlie was stationed at Camp Chaffee in Arkansas, where he worked as a cook helping to feed all the soldiers. On February 15, 1969 he married Connie Lee Fick and she survives. Charlie retired from Tecumseh Products after 43 years of dedication. During his time at Tecumseh Products, he filled many different roles on the line and ended his career as line inspector. In his free time he enjoyed hunting, fishing and bowling in his younger years. He was a former member of Blissfield Evangelical United Methodist Church. In addition to Connie, his wife of 52 years, he is survived by sons, Steve (Beth) Wilson and Tim (Sharyl) Wilson; grandsons, Nathan and Nicholas Wilson; 5 great-grandchildren; and nephews that he also considered as sons, Ron and Mike Andrews. He was preceded in death by his parents, stepfather, Carl Albin; daughter, Sheryl L. Wilson, and his sister, Clarabelle Sinclair. A gathering of family and friends will be held on Friday, April 9, 2021 from 2 to 4 p.m. at Wagley Funeral Home, Tagsold Chapel in Blissfield. Memorial service will follow at 4:00 p.m. at the funeral home. Following the Governor’s executive order, all attendees are required to wear a proper face covering, with the exception of those under the age of five years old or those who cannot medically tolerate. Contributions in Charlie’s memory may be made to the donor’s choice. Online memories and condolences may be shared at www.WagleyFuneralHomes.com.

BLISSFIELD &#8211; Charles E. Wilson, 87, of Blissfield died early Tuesday morning, March 30, 2021 at Ebeid Hospice Residence in Sylvania, Ohio with his wife by his side. Charlie was born on December 2, 1933 in a log cabin on the outskirts... View Obituary & Service Information

The family of Charles Edward Wilson created this Life Tributes page to make it easy to share your memories.

Send flowers to the Wilson family.