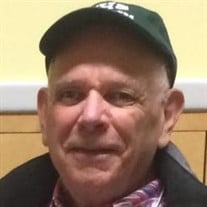 BLISSFIELD— Charles “Chuck” Vollers was born in the Bronx, NYC, on April 17, 1941, and died on June 24, 2020 in Lansing, MI, following surgical complications. He was raised in Yorktown Heights, NY, where his first jobs were behind the counter at the local pharmacy and at the Sparkle Lake Tea Room, where he delighted in serving up milkshakes for his many friends. He graduated from Yorktown High School in 1958 and attended Alfred University where he received a Bachelor of Science Degree in Ceramic Engineering. While at Alfred, he met the love of his life and future wife, a nursing student, Judith Doyle. In 1964, he moved to Toledo, Ohio after accepting his first professional job as an engineer at the Owens Illinois Technical Center, beginning a 24-year career in the glass industry. He advanced through several engineering and technology positions at O-I, leaving as Supervisor of fiber optic and laser glass pilot production. In 1973 he became a founding Director, and Vice President of Operations, at Kigre, Inc., a specialty glass maker. He ran operations there until 1984, and was the co-holder of three US Patents for laser glass compositions. He remained a consultant to Kigre until 1988. In October of 1964, he married Judith Doyle in New Woodstock, NY, and they lived in Toledo until 1976, when they moved to Blissfield, MI, to raise their three young sons. Chuck became involved in Blissfield Village affairs, first as a member of the Planning Commission, then as a Village Trustee, and finally elected as Village President, for two terms, from 1987 through 1991. He was active on many boards, including Lenawee Tomorrow, the Lenawee County Chamber of Commerce, the Blissfield DDA, and the River Raisin Watershed Council, where he directed and participated in many river cleanup projects. He was one of the founders of the River Raisin Festival. After Judi tragically died in an automobile accident in 1990, he turned his attentions to his sons, and eventually a new business venture. He renovated the Riga Tavern and reopened it in 1994 as a family friendly restaurant, enjoying cooking for and serving four generations of clientele, many of the youngsters he considered as surrogate family. He sold the Tavern in 2017 and moved to East Lansing, MI, to live with his son Doyle. Family reunions were a particular joy, as were attending Detroit Tigers, Toledo Mudhens and Lansing Lugnuts games, along with spending a week at Tigers Spring Training in Lakeland Florida most years. He enjoyed reading and listening to classical music, and attending concerts of the Toledo and Adrian Symphonies. Surviving are his three sons, Doyle, of Tallahassee, FL, Jason of Ithaca, NY, and Jonathan (Dawn) of Sammamish, WA; four grandchildren, Jake, Kellen, Griffin, and Emilia; sisters Judith Martin in California, and Maryanne Vollers Campbell in Montana. He was preceded in death by his parents, Joseph and Josephine Vollers, and brothers Joseph and Robert. He has been cremated and at his request, there will be no services. A gathering of family and friends will be held at the Riga Tavern at a date yet to be determined. Arrangements were entrusted to Wagley Funeral Home, Tagsold Chapel in Blissfield. Online memories and condolences may be shared at www.WagleyFuneralHomes.com

The family of Charles "Chuck" Vollers created this Life Tributes page to make it easy to share your memories.

BLISSFIELD— Charles “Chuck” Vollers was born in the Bronx, NYC,...

Send flowers to the Vollers family.