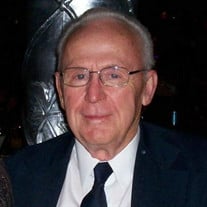 ADRIAN – Charles E. Schadewald, 82 of Adrian, passed away Monday, July 22, 2019, at Ebeid Hospice in Sylvania. He was born April 20, 1937, in Adrian, the ninth of the eleven children of William Sr. and Mary (Hegy) Schadewald. He was a 1955 graduate of Deerfield High School. Charles proudly served in the United States Army. On September 25, 1965, he married Frances Grady, and they celebrated 49 years together. She preceded him in death in 2014. He was employed by Citizens Gas for many years before going to work at Madison Public School, where he retired. Charles was a member of St. John’s Lutheran Church. He was also a member of the American Legion Post #97. He enjoyed bowling, race car driving, camping and traveling. Charles participated in the Relay for Life several years. He is survived by his children: Shannon (Russ) Creech of Adrian, Patrick (Renee) Bracey of Deerfield, Erin (Tim) Palmer of Alma, MI, Scott Schadewald and Brian Schadewald, both of Adrian; 12 grandchildren, 14 great grandchildren, 2 great great grandchildren and sisters, Maybelle (Gaylin) Berry and Donna Case. In addition to his wife, he was preceded in death by a son Michael Bracey and siblings: William Jr., Hazel Seegert, Glenda Shirley, Norman, Don, Mary Disbrow, Stanley and Carol Lash. Funeral services will take place at 3 p.m., Thursday, July 25, 2019, at Wagley Funeral Home with Rev. Joel Sarrault officiating. Burial will follow at Ridgeway Cemetery with military honors conducted by American Legion Post #97 and VFW Annis Fint Post #1584. Visitation will be held at the funeral home Thursday from noon until the service at 3 p.m. Memorial contributions are suggested to American Cancer Society. Online condolences and memories may be shared at www.WagleyFuneralHomes.com.

The family of Charles E. Schadewald created this Life Tributes page to make it easy to share your memories.

Send flowers to the Schadewald family.