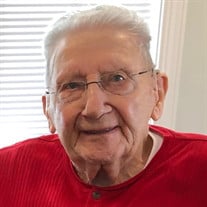 ADRIAN – Charles ‘Ernie’ LeMay, age 89 of Adrian, formerly of Essexville, passed away Friday, July 13, 2018, at Charlotte Stephenson Manor. He was born August 7, 1928, in Bay City, Michigan, the fourth of Marshall and Ella (Sorns) LeMay’s five sons. He graduated from Bay City Central High School and proudly served his country in the United States Army during the Korean Conflict. On April 30, 1949, he married Betty Murray, and faithfully lived out his vows for over 69 years. After Ernie retired from General Motors with 38 years of service, he remained loyal to the GM brand his entire life. He was a talented stained glass artist who specialized in making beautiful lampshades. Ernie was a member of St. James Catholic Church in Bay City. Ernie was a loving husband, father, grandfather and great grandfather who will be greatly missed by his family including his wife, Betty; sons, Gregory (Joanne) of Voorhees, NJ and David (Joni) of Adrian; grandchildren, Elizabeth, Elise (Ori), Erica (Perry) and Benjamin (Lindsay); great grandchildren, Eli, David, Mia and Evie; and a brother, Thomas (Arlene) of Cadillac. In addition to his parents, he was preceded in death by three brothers, Marshall, Harold and Hank. A memorial mass will take place at 10 a.m., Saturday, July 21, 2018 at St. Mary’s Catholic Church in Adrian with Rev. Thomas Murphy as celebrant. Visitation will be held at the church on Saturday from 9 a.m. until 9:45 a.m. In lieu of flowers, memorial contributions are suggested to Hospice of Lenawee. Online condolences and memories may be shared at www.WagleyFuneralHomes.com.

The family of Charles 'Ernie' LeMay created this Life Tributes page to make it easy to share your memories.

Send flowers to the LeMay family.