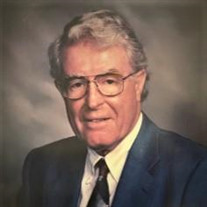 ADRIAN – Charles E. Gross passed away while under the compassionate care of Hospice of Lenawee on November 27, 2020, after a life lived fully. He was born in Detroit, Michigan April 25, 1928, the son of Charles E. and Maricatharine S. Gross. His early life was rudely interrupted by the death of his parents in an auto accident in 1936. He went with his younger brother, John, to live with an aunt and uncle who subsequently sent him to Howe Military School which became his home until graduation in 1946. Chuck attended Albion College where he met his wife Elizabeth (Betty McLaren) who he married shortly after graduation in 1950. He served in the US Navy from 1952 to 1956. Following a stint in the Navy, he returned to Detroit to pursue a career in public accounting. In 1961, Chuck moved with his family to Adrian to assume the management of the local branch of his CPA firm. In the early 1970’s he and Keith Ludwig started the Gross and Ludwig CPA firm. Chuck retired in 1993 and the firm became known as Gross, Puckey, Gruel & Roof. Throughout his life he enjoyed sports such as golf and racquetball. He was an avid fan of all the local high school, college and professional teams. He was extremely active in the community including many leadership positions. He was a board member of the Michigan Association of CPA’s, People’s Savings Bank and United Savings Bank. Chuck was also a trustee at Howe Military School and was a member of their Hall of Honor. He started the Stubnitz Foundation which has distributed millions of dollars in Lenawee County. Chuck was also on the boards of Bixby Hospital, Lenawee Country Club, Adrian Public Schools and many others. He enjoyed the Adrian Rotary Club for over 25 years. Chuck was most proud of his family and his marriage of 70 years. He is survived by his wife Betty, son Charles H. (Margaret) of Tecumseh, Douglas (Sabrina) of Saline and Nancy Eggenberger (John) of Canton; his nine grandchildren Max, Bob, William, Natalie, Audrey, Lily, Maricatharine, Olivia and Brian and great grandson, Edison. He is also survived by his sister-in-law, Elinor Upjohn and many nieces and nephews with whom he maintained a close relationship through the family cottage known as the OSYC. He was predeceased by his brother, John Gross and his brother in law, Jim Upjohn. He lived a full life, enjoying winters for many years on Singer Island, Florida. His travels led him to many parts of the world and most of the US. His legacy includes being a friend and mentor to many, a love of his family and community. Chuck continued to have a good sense of humor seeing the day to day ironies of life. Known among his family for his love of cookies, he loved homemade, but any cookie would do, and they were consumed at the end of every meal except breakfast! He and Betty nicely transitioned over the last 5 years from a very active life to one primarily consisting of reading books and newspapers remaining on top of all that was happening in the world. Due to the pandemic health restrictions, public services will take place at a later date. Arrangements are entrusted to the care of Wagley Funeral Home in Adrian. Contributions in his name may be made to Lenawee Community Foundation Fund for Hidden Lake Gardens to support the Canopy Walk. Online memories and condolences may be shared at www.WagleyFuneralHomes.com

ADRIAN &#8211; Charles E. Gross passed away while under the compassionate care of Hospice of Lenawee on November 27, 2020, after a life lived fully. He was born in Detroit, Michigan April 25, 1928, the son of Charles E. and Maricatharine S.... View Obituary & Service Information

The family of Charles Ernest Gross III created this Life Tributes page to make it easy to share your memories.

ADRIAN – Charles E. Gross passed away while under the compassionate...

Send flowers to the Gross family.