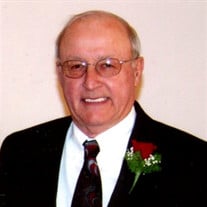 DEERFIELD—Charles “Chuck” F. Fischer, age of 83, of Deerfield, passed away on October 18, 2018, at Toledo Hospital. Chuck was born on July 3, 1935, in Adrian, to Henry and Barbara (Spiegel) Fischer. He graduated from Blissfield High School. In 1957, Chuck married Marjorie Wahl and they shared 45 years together before her passing in 2002. On January 15, 2005, he married Judy (Diver) Hoffman and she survives. Chuck was a hard worker and lifelong farmer raising crops in the Deerfield area and retiring from Blissfield Manufacturing. He was a member of Immanuel Lutheran Church in Palmyra. Chuck enjoyed fishing, snowmobiling, camping and playing Euchre. Chuck was an avid bird watcher and was able to tell the type of bird just by the sound they made. He often took the time to visit with family and friends while relaxing outside in a lawn chair. Chuck’s devotion and love for his family was felt by all who were fortunate to call him husband, father, grandpa and great grandpa. Survivors include his wife Judy; children Debra (Gerald) Seidell of Pittsburgh, PA, Keith (Debra) Fischer of Blissfield, Kevin (Bobbi) Fischer of Denver, NC, Jolene(Dan) Witt of Deerfield; ten grandchildren; four great grandchildren; stepchildren, Larry Dean (Wanda) Hoffman, Carla Rice, Lee (Amy) Hoffman and Colleen (Larry) Handy; twelve step grandchildren and twelve step great grandchildren, and a brother in law, Lawrence Marks. He was preceded in death by his parents, wife, Marjorie; great granddaughter, Arynnleigh and siblings, Ruth, Richard and Charlotte. Funeral services for Chuck will be on Tuesday, October 23, 2018, at 11:00 a.m. at Immanuel Lutheran Church in Palmyra, with Pastor Gary Leking officiating. Burial will follow at Pleasant View Cemetery in Blissfield. Visitation will be on Monday, October 22, 2018, from 3 to 8 p.m. at Wagley Funeral Home, Tagsold Chapel, Blissfield. There will also be visitation from 10:00 a.m. until the time of the service on Tuesday. Memorial contributions may be made to Immanuel Lutheran Church or to the Salvation Army. Online condolences and memories may be shared at www.wagleyfuneralhomes.com.

The family of Charles F. Fischer created this Life Tributes page to make it easy to share your memories.

Send flowers to the Fischer family.