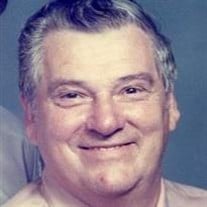 ADRIAN – Charles “Bub” Theodore Etter, 87, passed away Sunday, April 16, 2017, at his beloved farm. He was born January 23, 1930 in Adrian, MI, the son of the late Ivan and Emma (Cope) Etter. He married Myrna Ann Hamden on March 28, 1949 in Angola, IN, and she survives. Charlie was employed with Bohn Aluminum for over 40 years, but his lifelong passion was his farm. He owned and operated Etter’s Chick Haven housing over 40,000 chickens along with steers and pigs. Charlie dearly loved his children, grandchildren and great grandchildren. He enjoyed bowling, square dancing, bingo, playing cards, Las Vegas, 4-H, serving as a deacon at Palmyra Presbyterian Church, his commitment to his community and his famous BBQ chicken legs! His humor and laughter will be missed, along with his fellowship with all that entered his life. Everyone knew it would be 3 days to start farming when he would get stuck in the spring with his tractor. Surviving Charles in addition to his wife, Myrna of 68 years, are five children: Nancy (Chris) Pellowe of Adrian, Brenda Etter of Oklahoma, Terry (Linda) Etter of Adrian, Kathy (Neal) Staup of Onsted, and Sally (Troy) Bevier of Tecumseh; one sister, Dorothy Parker of Adrian; 12 grandchildren; 11 great grandchildren and several nieces and nephews. Charles was preceded in death by his parents, Ivan and Emma Etter; brothers, Harvey and Dale Etter; father and mother-in-law, Harvey and Linnie Hamden and two granddaughters. Funeral services will take place at 2:00 p.m., Wednesday, April 19, 2017, at Wagley Funeral Home with Rev. Douglas Holmes officiating. Burial will follow at Palmyra Cemetery. Visitation will be held at the funeral home Tuesday from 4:00 to 8:00 p.m. In lieu of flowers, memorial contributions made to Hospice of Lenawee or Palmyra Presbyterian Church. Online condolences and memories may be shared at www.WagleyFuneralHomes.com.

The family of Charles "Bub" Etter created this Life Tributes page to make it easy to share your memories.

Send flowers to the Etter family.