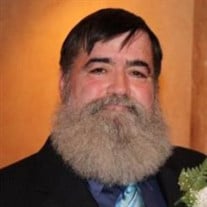 DEERFIELD – Charles Emerson Downing, 75, of Deerfield died Friday morning, April 30, 2021 at Beaumont Hospital in Trenton, Michigan. Born March 19, 1946 in Ann Arbor, he was the son of W. Jackson (“Jack”) and Margaret Ann (Quernbach) Downing. Highly educated, Charles earned his Bachelor’s Degree in Biology and certificates in both Respiratory Therapy and electronics. Charles made his career in Respiratory Therapy and teaching music. He was an active member of Immanuel Lutheran Church in Palmyra, where he served as an Elder and often shared his musical talents. Music was a true passion of Charles. He played both guitar and bass guitar and enjoyed teaching others to play. On January 3, 2010 Charles married Judie DeSeranno Downing at Leonardo’s Restaurant in Romulus, MI. She survives to share over eleven years of memories. Together, Charles and Judie loved serving their community and neighbors. They used their time, talents, and efforts as hospice volunteers and dressed up as Mr. & Mrs. Santa Claus each Christmas. In addition to his wife, Judie, Charles is survived by his four children, Elizabeth (Allen) Kelley of Toledo, OH, Jon (Julie) Downing of Flat Rock, MI, Tim Downing of Lincoln Park, MI, and Abigail (Ryan) Wuerth of Van Buren Twp., MI; three grandchildren, Madison, Daniel, and Raylen; and four siblings, Diane Downing, Jeanne Downing, Dave Downing, and Marc (Cindy) Downing. Charles was preceded in death by his parents; sister, Sue McCleery; and brother, Harry Downing. Per Charles request, cremation will take place. A memorial service for Charles will be held on Saturday, May 22, 2021 at 2:00 p.m. at Immanuel Lutheran Church, 1500 North Blissfield Highway, Palmyra, MI. A memorial visitation will take place on Saturday at the church beginning at 1:00 p.m. and continuing until the time of the service. Wagley Funeral Home, Tagsold Chapel, Blissfield has been entrusted with arrangements, where online memories and condolences may be shared at www.WagleyFuneralHomes.com. The family suggests that memorial contributions to honor Charles memory be made to Hospice of Lenawee.

The family of Charles E. Downing created this Life Tributes page to make it easy to share your memories.

Send flowers to the Downing family.