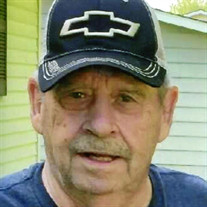 BLISSFIELD – Charles Kenneth “Ken” Cox, age 76, of Blissfield, died Saturday, June 11, 2022, at ProMedica Flower Hospital. He was born December 9, 1945, in Birmingham AL, to the late Evelyn Elliott. Ken attended Adrian High School before he joined the United States Army, serving during the Vietnam War. He married Ruth Leupp and they were just shy of celebrating 40 years before her death in 2001. Together they had 4 children and Ken enjoyed being involved with their activities. He coached baseball, softball and flag football when his children were young. As his family grew older, Ken cherished his title of grandpa and proudly supported his grandchildren and great-grandchildren’s in all of their activities and adventures. Ken worked as a fork lift operator at the General Motors Powertrain Toledo Transmission Plant, retiring after 35 years of service. He was a member of the Blissfield American Legion Post #325. Ken liked to be out in nature especially hunting and fishing. When the weather turned colder, you could find Ken at Rich Lanes bowling on several leagues over the years. He is survived by his children, Ken Cox, Tammy (Scott) Wynn, Kim Cox (Mike Barton) and Jamie (Rich) Weirich; grandchildren, Shawn (Kristin) Cox, Jacob Cox, Taylor Weirich, Madison Weirich, Austin Wynn and Brady Weirich; and great-grandchildren, Aiden Cox and Avree Cox. He was preceded in death by his mother; wife, Ruth; and their infant twin daughters, Ann and Jan. Funeral services will be held on Thursday, June 16, 2022 at 2 p.m. at Wagley Funeral Home, Tagsold Chapel in Blissfield with military chaplain Lindon Burkholder officiating. Burial will follow at Pleasant View Cemetery. Visitation will be at the funeral home from 12 p.m. until the time of the service. Memorial contributions may be made to the Blissfield American Legion Post #325. Online condolences and memories may be shared at www.WagleyFuneralHomes.com.

The family of Charles Kenneth "Ken" Cox created this Life Tributes page to make it easy to share your memories.