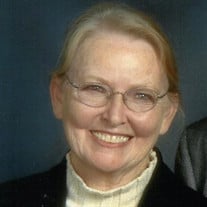 ADRIAN –Carol Landis Stewart, age 89, of Adrian died on Sunday, September 26, 2021 at ProMedica Charles & Virginia Hickman Hospital with her loving family by her side. She was born on September 29, 1931, to Lester and Elizabeth (Lavin) Landis in Wichita, Kansas. Carol graduated from North High School in Wichita with the Class of 1949. She went on to attend the University of Kansas where she earned a Bachelor of Science degree in Occupational Therapy. Carol was working in Iowa as an occupational therapist when she met her future husband, Landis C. Stewart. They were united in marriage on August 21, 1954 in Wichita, Kansas and were blessed with 66 years before his death on February 16, 2021. Carol was a natural artist in many areas- painting, pottery, and calligraphy to name a few. Her eye for design continued outside where she took great pride in creating beautiful gardens around the family home. She belonged to Adrian’s local Alpha Omega Sorority, Alpha Chi Omega Phi Chapter at the University of Kansas and was a member of North Rome Baptist Church. Being the mother of seven children is not for the faint of heart and Carol rose to the challenge. She loved being involved with her children and their many activities while growing up. She is survived by her children, Elizabeth Lucille Stewart, David Landis (Kimberly) Stewart, Peter Clifford Stewart, Joseph Donald (Patricia Maria) Stewart, Frances Marian Stewart, Martha Virginia Landis (Alex Britton) Stewart and Robert Landis Stewart; 15 grandchildren and 4 great grandchildren. Carol was preceded in death by her husband, Landis, earlier this year. A memorial service will be held on Saturday, October 9, 2021 at 2 p.m. at Wagley Funeral Home, in Adrian with Pete Pepple officiating. Visitation will take place from 1 p.m. until the time of the service. A reception will be held immediately following the service at the funeral home in the Heritage Room. There will be a private graveside service at Oakwood Cemetery where Carol will be interred with her husband, Landis, at a later date. Memorial contributions may be made in Carol’s name to North Rome Baptist Church, Autism Speaks or the charity of your choice. Online condolences and memories may be shared at www.WagleyFuneralHomes.com.

ADRIAN &#8211;Carol Landis Stewart, age 89, of Adrian died on Sunday, September 26, 2021 at ProMedica Charles & Virginia Hickman Hospital with her loving family by her side. She was born on September 29, 1931, to Lester and Elizabeth (Lavin)... View Obituary & Service Information

The family of Carol Landis Stewart created this Life Tributes page to make it easy to share your memories.

Send flowers to the Stewart family.