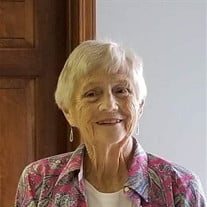 BLISSFIELD- Carol Mae Sheldon, age 85 of Blissfield, passed away on Friday, December 07, 2018, at Blissfield Place surrounded by her family. She was born May 18, 1933, in Toledo, to Rex G. and Bernice (Haidle) Crist. After Bernice’s passing, Carol was blessed with a second mother, Sarah Eudora Crist. Carol attended school in Blissfield and graduated with the Class of 1951. Carol married Harvey L. Sheldon on June 24, 1951, at the Blissfield First United Methodist Church, where she was a lifelong member. They shared 52 years together before his passing in 2003. Always one to be active, Carol enjoyed painting, golfing and bowling. She attended all of her children, grandchildren and great-grandchildren’s school programs and sporting events. Harvey and Carol wintered in Sebring, Florida for over 30 years and enjoyed spending the warm weather with the other Blissfield snowbirds. She easily made friends wherever she was with her quick wit and ever ready smile. She is survived by her children, Connie (Michael) Cox of Blissfield, Michael (SueEllen) Sheldon of Blissfield, Bonnie (Robert) Love of Adrian and Chris Sheldon of Belleville, MI; grandchildren, Kelly (Jason) Higgins, Nicholas (Tovah) Sheldon, Kimberly (Isaac) Phillips, Neal (Aly) Sheldon, Amanda (Ken) Iffland Jr., and Bradley Emerson; great-grandchildren, Amy and Zachery Higgins, Wilson and Amari Sheldon, Gavin and Jordan Phillips, Blake and Garrett Iffland, Samantha and Lane Smith-Emerson, and Isabella and Josephine Sheldon. She was preceded in death by her parents; husband Harvey; siblings, Bruce and Dean Crist and Barbara Osborne; daughter-in-law, Kathryn Sheldon and granddaughter Dawn Cox. Funeral services for Carol will be on Tuesday, December 11, 2018, at 11:00 a.m. at Blissfield First United Methodist Church with Pastor Kristen Coristine officiating and assisted by Carol’s son, Michael Sheldon. Burial will follow at Palmyra Cemetery. Visitation will take place on Monday, December 10, 2018, from 3 to 8 p.m. at Wagley Funeral Home, Tagsold Chapel in Blissfield. Memorial contributions in memory of Carol may be made to Blissfield First United Methodist Church, Hospice of Lenawee or Blissfield Place. Online condolences and memories may be shared at www.wagleyfuneralhomes.com.

BLISSFIELD- Carol Mae Sheldon, age 85 of Blissfield, passed away on Friday, December 07, 2018, at Blissfield Place surrounded by her family. She was born May 18, 1933, in Toledo, to Rex G. and Bernice (Haidle) Crist. After Bernice&#8217;s passing,... View Obituary & Service Information

The family of Carol Mae Sheldon created this Life Tributes page to make it easy to share your memories.

Send flowers to the Sheldon family.