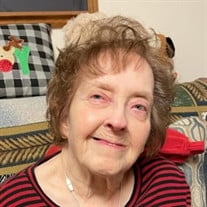 ADRIAN—Carol Ann Greenwald, age 84, of Adrian, died Sunday afternoon, May 15, 2022, in the comfort of her home at Brookdale of Adrian while under the compassionate care of Hospice of Lenawee. Born New Year’s Day 1938, in Adrian, she was the daughter of the late William and Ruth (Swenk) Ward. Carol, a lifelong Adrian resident, was a 1956 graduate of Adrian High School before obtaining a B.A. in Political Science from Adrian College. Carol married the love of her life, Larry Greenwald, on June 13, 1964, at Christ the Redeemer Lutheran Church in Adrian, and they shared over 52 years before his passing on July 30, 2016. Carol devoted her working career to public education, teaching for three years at Hanover-Horton Schools before a 31-year tenure with Blissfield Community Schools, where she taught Civics and History. She earned the title of “Teacher of the Year” several years while at Blissfield and impacted countless lives of students in their most formative years. She loved her students with all of her heart and was persistent in her demand that they perform their civic duty and vote in every election. Active in her community, Carol had memberships in the Lenawee Humane Society Board Emeritus, Right to Life of Lenawee County, Salvation Army Board, and belonged to the Adrian First United Methodist Church. She loved animals, and often would foster cats who needed a home. Civically, she was a proud member of the Lenawee County Republican Party where she was at times both Vice President and President as well as “Republican of the Year” many times, and served as the Republican Precinct Delegate in 1986. She was notably a state committeewoman for seven years, and served as a delegate to the Republican National Convention for 2 terms. Surviving to mourn her loss are her niece, Shelly (Robert) Pinnell of Marysville, OH; a special nephew, John Birchfield and other nieces and nephews; a great-niece Rachel Pinnell; cousin, Dick (Carolyn) Ward of Adrian; and her special teacher friend, Karen Dilley of Adrian. In addition to her parents and husband Larry, she was preceded in death by her two siblings, Sharon Stewart and Allen Ward. A funeral service for Carol will be held on Wednesday, May 18, 2022, at 2:00 p.m. at the Adrian First United Methodist Church with Rev. Eric Stone and Rev. Anna Good officiating. Burial will follow in Madison Center Cemetery. Visitation will be held on Wednesday, May 18, from 1:00 p.m. until the service begins. In the spirit of Carol’s love for animals, memorial donations are suggested to the Lenawee County Humane Society. Online condolences and memories may be shared at www.WagleyFuneralHomes.com.

ADRIAN&#8212;Carol Ann Greenwald, age 84, of Adrian, died Sunday afternoon, May 15, 2022, in the comfort of her home at Brookdale of Adrian while under the compassionate care of Hospice of Lenawee. Born New Year&#8217;s Day 1938, in Adrian,... View Obituary & Service Information

The family of Carol Ann Greenwald created this Life Tributes page to make it easy to share your memories.

Send flowers to the Greenwald family.