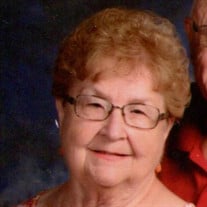 BLISSFIELD- Carol Ann Burgermeister, 82, of Blissfield, died Wednesday evening, September 2, 2020, at Blissfield Place. She was born October 31, 1937, at home, in Deerfield, to George and Marjorie Wandt (Raitz) Crunkilton. Carol graduated from Deerfield High School in 1955, she then attended Eastern Michigan University where she earned a Master’s Degree in Education. She taught business at Deerfield and Blissfield Schools for 30 years, although her first job was at Rev Co, in Deerfield as a secretary. Carol was very talented in multiple crafts, including quilting, painting, pencil art, basket making, listing just a few. On November 17, 1974, she married Edward “Duke” Burgermeister at St. Peter the Apostle Church in Blissfield, were she was a member. She and Duke, were blessed to spend over 25 winters together in Sebring, Florida. They made many memories together in their 46 years of marriage before he preceded her in death on September 27, 2019. Survivors include her daughter, Sally (David) Fritz of Blissfield; her brothers, Jim (Kay) Crunkilton of Deerfield and Curtis (Sharon) Crunkilton of Tecumseh; sister- in- law and brother- in -law, Rosie and Larry Truckor of Metamora, Ohio; grandchildren, Steven Burgermeister, Deatra (Nick) Nieman and Heather (Ryan) Walentowski, all of Blissfield; step-grandson, Kyle (Nicole) Cheney of Blissfield; six great-grandchildren, Kenley and Braxton Burgermeister, Grace and Wyatt Nieman, and Landen and Brayden Walentowski; two step great-grandchildren, Johathan and Hannah Cheney and daughter-in-law, Jeanne Burgermeister of Blissfield and many nieces and nephews. Besides her husband, Duke, Carol was preceded in death by her parents and sisters, Norma Jean and Mary Marie and son, Mark Burgermeister. Funeral services for Carol will be Thursday, September 10, 2020, at 11 a.m. at Wagley Funeral Home, Tagsold Chapel, Blissfield, with Rev. Jeffery Poll as Celebrant. Rite of Committal will follow in Pleasant View Cemetery in Blissfield. Visitation will be Wednesday, September 9, 2020, from 3 to 8 p.m. with a rosary at 7 p.m. at Tagsold Chapel. Following the Governor’s executive order, all attendees are required to wear a proper face covering, with the exception of those under the age of five years old or those who cannot medically tolerate. Memorial contributions in Carol’s memory are suggested to Careline Health Group. Online memories and condolences may be shared at www.WagleyFuneralHomes.com.

The family of Carol Ann Burgermeister created this Life Tributes page to make it easy to share your memories.