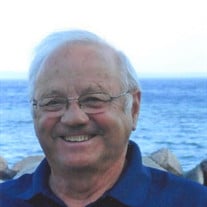 ADRIAN – Carl Oren Phipps age 80, of Adrian, died on Friday, December 10, 2021, at home under the care of Elara Hospice. Carl was born on July 14, 1941, to Carl and Nettie (Steveson) Phipps. Born and raised in Adrian, Carl graduated from Adrian High School with the Class of 1959. Carl & Judy Minster met as teenagers and were married on October 7, 1961. They recently celebrated their 60th wedding anniversary. They raised two children, Christine (Greg) Waters of Yakima Washington, and Michael (Judie) Phipps of Portage, Michigan, and were also blessed with five grandchildren, who were the light of Carl’s life, Justine (Ben) Long, Carly Waters, Alison Waters, Emily (Reece) Hunter, and Nicholas Phipps, and one great-grandchild who is on the way. Carl was employed by Citizens Gas Fuel Company for two decades, followed by several years as a customer service specialist, in the heating & cooling and automotive fields. After retirement, Carl continued to work part time, taking on roles that supported his love of golf and socializing, including serving as the Pro Shop Manager of the Wolf Creek Golf Club. Carl was a friend to everyone he met. He had a helpful heart, lending his hand to support those he knew and even those he didn’t. He also had quite a sly sense of humor and could be counted on to lighten the mood in any situation. Carl was an activist for the Adrian community, serving as a Junior Achievement Advisor, past president of the Adrian Jaycees, former state vice president for the Michigan Jaycees and past president of the Adrian Evening Lions Club. He also served as the secretary of his bowling league for over 30 years. His time with the Jaycees led to many lifelong friendships, including Pat & Norm Myers, with whom he and Judy shared countless adventures. In addition to his love of golf, Carl also loved fishing. In warm months, he was often found on his boat at Round Lake or socializing with friends at their summer place in Minster RV Park. Carl was a warm and loving grandfather, always on the sidelines of any of his grandkids’ events or milestones, visibly proud and cheering them on. He had a way with his grandkids, unconditionally loving them all, yet sharing a unique bond with each of them. Carl is survived by his wife Judy, their children and grandchildren, his brother, Gary (Sue) Phipps and brother-in-law, Jack Minster (Laurie Frase). Carl was preceded in death by his parents and sister, Sandra Betzoldt. Funeral services will take place on Monday, December 20, 2021, at 11 a.m. at Wagley Funeral Home, Adrian with Rev. Dr. Ann Marie Montgomery officiating. Burial will follow at Lenawee Hills Memorial Park in Adrian. Visitation will be held on Sunday, December 19, 2021, from 1 to 4 p.m. at the funeral home. The family has requested masks be worn by all who attend. A live streaming of the service will be accessible from Carl’s tribute wall for 90 days. Memorial contributions may be made to First Presbyterian Church of Adrian or Elara Caring Hospice. Online condolences and memories may be shared at www.WagleyFuneralHomes.com.

The family of Carl Oren Phipps created this Life Tributes page to make it easy to share your memories.

Send flowers to the Phipps family.