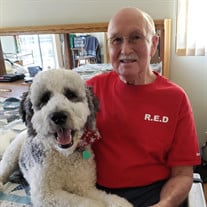 Carl loved God, his wife, and his family. Born on December 16, 1938, to Euel Verter and Willie Mae Maxey Davis in Tremont, Mississippi, Carl was the fifth of eleven children. He is survived by older siblings, Nell, Mary Ellen, and Raymond. Also surviving are younger siblings, Carolyn, David, Patrick, Kelly, Larry, and Daniel. After fourteen years in Mississippi, Carl and most of the Davis family made the trek to Adrian, Michigan, where he would set down roots and spend the rest of his life. At the age of 18, Carl started his family with the birth of his son, Carl Jr., followed by Julie, Christine, and Craig. During this time, he worked at Roadway Trucking before moving to United Parcel Service, where he would retire from after fifty-one years of combined service. Carl was a union steward for 17 years at UPS and fought for the rights of his coworkers. On October 4, 1980, he married the love of his life, Laura. With the marriage came his final child, Laurel Marie, whom he adopted when she was seven. Carl and Laura worked together at United Parcel Service while their love grew each day. During this time, his love and devotion to God also grew. Carl spent his Sunday mornings and evenings, and Wednesday nights carting his family to Adrian First Church of the Nazarene. “Uncle Carly” loved his Sunday mornings when he would drive the church van and pick up his nieces and nephews in order to bring them to church and share God’s love. Rumor has it their cherubic faces were often able to convince Uncle Carly to drive through Hot-N-Now Hamburgers for lunch on the way home. With other members of Adrian First, Carl was blessed enough to be able to travel to Ecuador, Mexico, and Guatemala, on Work and Witness trips. Through their combined efforts, the teams helped build churches, gathering halls, and parsonages, all while spreading the Word and Love of God. Over the years, Carl and Laura’s home became known as Davis Acres. Uncle Carly/Grandpa was always available for tractor rides, 4-wheeler chauffeur, raft builder, swimming hole monitor, grillmaster, and many other titles. He had a soft spot in his heart for his grandchildren, nieces, and nephews, and cherished all of the time spent loving them and making a fun environment for play. In 1998, after many years of hard work, Carl and Laura retired together and began fresh journeys. Carl, never one to have idle hands, found a new job at Crop Production Services, hauling field bounties to the elevators. He considered this his “fun job.” At CPS, Carl made many new friends. He developed two very important and special friendships with two of the men he worked with, his boss, Larry McKown, and George Anton. They were his friends, and also his brothers. Carl spent fifteen years “farming,” and though his health forced him to leave the truck, farming never left his heart. After their retirement, Carl and Laura were also blessed enough to be able to travel to every state in the union except for Hawai’i and Alaska. They visited many National Parks, enjoying the unique sites of our nation. Together, and at times with other family members, they traversed approximately 350 miles of the Appalachian Trail through sectional hikes. They climbed Mount Washington and the White Mountains. They spent much time hiking the Great Smoky Mountains. They favorite trip was to Angel’s Landing in Zion National Park, Utah. Winter months were spent as snowbirds in either Mercedes, Texas, or Dade City, Florida, where he became a shuffleboard champ. Carl and Laura also became avid bicyclists while escaping the snow and cold of Michigan, riding over 2100 miles in one winter season. Carl felt a pull on his heart leading him in a different direction in 2006. After much prayer and soul searching, he and Laura left Adrian First Church of the Nazarene and became founding members of Turning Point Church, to their everlasting joy. In 2013, Progressive Supranuclear Palsy (PSP) began to attack Carl’s body. During all that this disease threw at him, his faith and love for God and his family never wavered. He was asked, “Do you ever question why God allowed this to happen to you after you’ve dedicated your life to Him?” Carl’s answer was simple. “God doesn’t owe me anything.” On Thursday evening, June 11, 2020 Carl was called home to the place God created just for him. While he will be missed on this earth, we celebrate that he is now free from the ravages of PSP and is basking in God’s love. Along with his brothers and sisters, Carl is survived by a vast amount of friends, his children, grandchildren, great-grandchildren, and his devoted wife of 39 years, Laura; their children are Carl (Christina) Davis, Jr., Julie (Dale) Blackmon, Christine (Michael) Hofford, Craig (Kimberly) Davis, and Laurel (Young) Ng; grandchildren, James, David Jr., Alexander, Matthew, Jillian, Nicholas, Elanor, Zachary, Brian, Dana, Marissa, Matthew (Danielle); great-grandchildren, Nathan, Skylar, Dakota, Abby, Owen, Lucas, Lyla, Nora, Evelyn and Walker Thomas. Carl was preceded in death by his parents, his first wife, Shirley Maier (mother to Carl Jr., Julie, Christine, and Craig); an infant son, Rodney; great-grandsons, Owen and Zachary; brother, Ellis Richard and sister-in-law, Joy Davis. The family will receive friends for visitation on Monday, June 15, 2020 from 1:00 to 7:00 pm at Wagley Funeral Home in Adrian. A funeral service will be held on Tuesday, June 16, 2020 at 11:00 am at the funeral home with Pastor Christy Shaw and Rev. Larry Betz officiating. Burial will follow in Oakwood Cemetery. In lieu of flowers, contributions may be made to Turning Point Church of Lenawee County. Online memories and condolences may be shared at www.WagleyFuneralHomes.com

Carl loved God, his wife, and his family. Born on December 16, 1938, to Euel Verter and Willie Mae Maxey Davis in Tremont, Mississippi, Carl was the fifth of eleven children. He is survived by older siblings, Nell, Mary Ellen, and Raymond. Also... View Obituary & Service Information

The family of Carl Walker Davis created this Life Tributes page to make it easy to share your memories.

Send flowers to the Davis family.