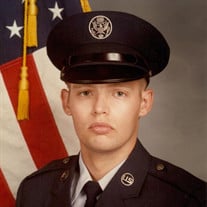 ADRIAN- Bryan K. Schultz, age 54 of Britton, formerly of Tecumseh, passed away Thursday, December 10, 2020, at his home. He was born March 26, 1966, in Honolulu, Hawaii, the only son of Stephen and Kathleen (Meyer) Schultz. After graduating from Tecumseh High School in 1984, he joined the United States Air Force. For the next 10 years, Bryan served his country working mostly in intelligence with the Air Force. While stationed in Thailand, he met his future wife, Sanguan Lathum, whom he married September 20, 1993. Bryan was currently working for Ford Motor Company at the Rawsonville Plant. In his younger years, he was involved with Boy Scouts. He loved airplanes, cars and trucks and made numerous models over the years which were often on display in Tecumseh. He was a member of International Plastic Modelers’ Society. Bryan planned many trips to air shows and museums where he often found patches to add to his military patch collection. In addition to his mother Kathleen Schultz and Sanguan, his wife of over 27 years, he is survived by his daughter Jennifer and sister Elizabeth Schultz as well as many extended family members. Also surviving are his treasured grand kitties Toe Beans and Grayson. He was preceded in death by his father Stephen in 2019. Funeral services will take place at 1 p.m., Friday, December 18, 2020, at Wagley Funeral Home in Adrian with Pastor Daniel Schultz officiating and military honors conducted by VFW Annis Fint Post #1584 and American Legion Post #97. Private burial will be at Oakwood Cemetery. Visitation will be held at the funeral home Friday from 11 a.m. until the service at 1 p.m. Following the Governor’s executive order, all attendees are required to wear a proper face covering, with the exception of those under the age of five years old or those who cannot medically tolerate. Memorial contributions are suggested to the Lenawee Humane Society. Online memories and condolences may be shared at www.WagleyFuneralHomes.com

ADRIAN- Bryan K. Schultz, age 54 of Britton, formerly of Tecumseh, passed away Thursday, December 10, 2020, at his home. He was born March 26, 1966, in Honolulu, Hawaii, the only son of Stephen and Kathleen (Meyer) Schultz. After graduating... View Obituary & Service Information

The family of Bryan K. Schultz created this Life Tributes page to make it easy to share your memories.

Send flowers to the Schultz family.