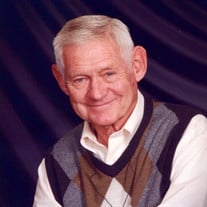 ADRIAN—Bruce Whitney Stephens, age 81 of Adrian, passed away Saturday, July 14, 2018 at the Lenawee Hospice Home surrounded by his loving family. Bruce was born May 15, 1937 in Defiance, OH to Donald and Catherine (Whitney) Stephens. On April 20, 1968, he married Rhea Fischer at North Blissfield Immanuel Lutheran Church. They just celebrated their 50th wedding anniversary. He graduated from Oakwood High School in Oakwood, Ohio. After graduation, he attended Adrian College where he received his BA degree. While attending Adrian College, he was an SAE Fraternity member and played basketball. He was inducted into the Adrian College Hall of Fame. He received his Master’s Degree from Siena Heights University and a specialist degree from Eastern Michigan University. He started teaching in Ohio and then Madison School district as a science teacher, driver’s education teacher, counselor and athletic director. He took part in the beginning of the Vo-Tech Center of Lenawee and later became principal until his retirement in 2001. His community involvement has been in the noon Rotary Club, member and President of the YMCA of Lenawee County, member and president of Lenawee Country Club. He was proud to be a faithful blood donor to the Red Cross, contributing over 14 gallons of blood. He also enjoyed being on the committee for Strokes for Students annual golf event. Bruce’s activities and interests were gardening, raising tea roses, travel, handball, golf, ran 7 marathons including the Boston Marathon and for over 40 years was part of the Adrian High School football chain gang. He was an avid sports fan, Go Bucks! Bruce was a member of the First United Methodist Church and served on the church Board of Trustees. Survivors include his wife Rhea and three sons, Jeff (Tarja) and their children, Tomas and Mia of Pembroke Pines, Florida; Greg (Erin) and their children, Jake and Josh from Chelsea, Michigan; Brad (Sharon) and their children, Sage and Trey from Castle Rock, CO; his sister Sara (Alan) Styles of Kalispell, MT and numerous nieces and nephews. In addition to his parents, he was preceded in death by a brother in law. Visitation for Bruce will be on Tuesday, July 17, 2018 at Wagley Funeral Home from 3-8 p.m. A memorial service will be at 10:30 a.m., Wednesday, July 18, 2018 at First United Methodist Church, Adrian with Pastor Drew Hart officiating. In lieu of flowers, donations can be made to Hospice of Lenawee or the First United Methodist Church. Envelopes will be available at the funeral home and the church. Online condolences and memories may be shared with the family at www.WagleyFuneralHome.com.

The family of Bruce Whitney Stephens created this Life Tributes page to make it easy to share your memories.

Send flowers to the Stephens family.