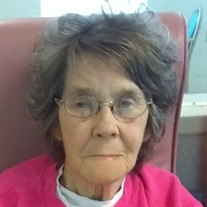 ADRIAN—Bobbie G. Holland McCarley, age 83, of Adrian, passed away at Magnum Care on Saturday, May 26, 2018. Bobbie was born August 2, 1934, in Hodges, Alabama, to Nalley and Martha (Green) Holland. On July 2, 1949, she married Robert McCarley, he preceded her in death in 1985. They celebrated 36 years of marriage. Bobbie worked for more than 20 years at Peerless Gear, from where she retired, as a machine operator. She also had worked at the Adrian and Blissfield Tomato Cannery. She was a member of Raisin Valley Friends Church in Adrian. She enjoyed gardening, yard work and being outdoors. She will be greatly missed by her family. She is survived by her daughter, Brenda (Tim) Stratton; grandchildren, Timothy A. (Deborah) and Terry R. Stratton; great-grandchildren, Isabelle (Ella), Cole, Abigail (AJ), Andrew, and Carly; brother, Jimmie Holland; step-grandchildren, John Beatty, Jackie Kreuz and Kim Gray; and numerous step-great-grandchildren. Bobbie was preceded in death by her parents, husband, Robert, son, ML McCarley, siblings, Wilford, Nalley “LaVaughn”, Dorothy Garland and a sister in infancy. The family would like to thank the staff of Magnum Care and Hospice of Lenawee for their exceptional and loving care of Bobbie. Funeral services for Bobbie will be held at 1 p.m. Thursday, May 31, 2018 at Wagley Funeral Home with Rev. Doug Chandler officiating. Burial will follow at Lenawee Hills Memorial Park, Adrian. Visitation will be Wednesday, May 30 at the funeral home from 2 to 8 p.m. Contributions in memory of Bobbie may be made to Hospice of Lenawee. Online condolences and memories may be shared at www.WagleyFuneralHome.com.

The family of Bobbie G. McCarley created this Life Tributes page to make it easy to share your memories.

Send flowers to the McCarley family.