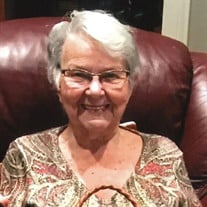 ADRIAN – Beverly Antonia Larsen Scully, age 92, of Adrian died on Thursday, October 7, 2021 at Provincial House in Adrian. Born in Duluth, Minnesota on January 9, 1929 Parents: Ragna and John Lauritz Larsen Lived in Washington, D. C. from 1939 to 1951 Graduated from American University in Washington, D. C. in 1949. Attended graduate school at American University and was employed by Aircraft Industries of D. C. She was Women's Editor at the Springfield, Ohio, News and Sun Newspaper until marriage to Dr. Daniel William Scully on July 10, 1954. The couple moved to Charleston, Illinois where Dan was a professor at Illinois State University. Son Daniel was born in 1956 and son Geoffrey was born in 1959. The family moved to Adrian, Michigan where Dr. Scully was a professor at Adrian College until his retirement. Daughter Anne Elizabeth was born in 1964. Beverly has six grandchildren and one great grandchild: Daniel Lawrence Scully, Nancy Nicole Scully, Geoffrey William Scully, Alexander Eran Warner, Beverly Grace Warner, Sarah Anne Warner and Ivy Josephine Scully. Her daughters in law are Karla Scully and Linda Scully and her son-in-law is Eric Warner. Dan preceded Beverly in death in 2000. Her mother died in 1997, her father in 1950, her sister, May, in 2003. and sister Gloria in 2008. She is survived by a loving niece, Janice Beeson of Ohio and a dear nephew, Dale, also of Ohio. Beverly was active in the Faculty Women's Club at the college, Monday Literary Club,the PEO Sisterhood, Alpha Omega, and Monday Literary Club. Funeral services will take place on Wednesday, October 13, 2021 at 11:00 a.m. at Wagley Funeral Home in Adrian with Pastor Ron Sparks officiating. Burial will follow at Lenawee Hills Memorial Park in Adrian. Visitation will be held at 10:00 a.m. until the time of the service. Memorial contributions may be made to the Catherine Cobb Safe House. Online condolences and memories may be shared at www.WagleyFuneralHomes.com.

The family of Beverly L. Scully created this Life Tributes page to make it easy to share your memories.

Send flowers to the Scully family.