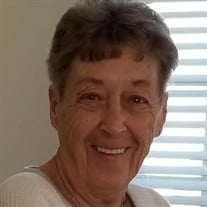 NORTH PRINCE GEORGE, VA – Beverly Mae Johnston, age 77, formerly of Blissfield and Adrian, died Saturday night, January 11, 2020, at her home in North Prince George, VA surrounded by her family while under the compassionate care of Hospice of Virginia. Born June 12, 1942 in Heilwood, Pennsylvania, she was the daughter of the late Cecil Fay and Mabel Irene (Howard) Walker. Beverly graduated from high school in 1961. She dedicated her life to proudly caring for her children and her home. Beverly was also employed part time as a nursing assistant caring for those at Adrian Dominican Sisters, from July 1983 to April 1994. Beverly enjoyed sewing, knitting and crocheting. She liked to cook and was an excellent baker. Known for her kind heart, Beverly loved to make small gifts and share them with those coping with cancer and the nursing team, while she was recovering herself. She enjoyed hot air balloons and was thrilled to finally get to ride in one. She also enjoyed the peaceful farm life, where she spent many years. Survivors include her children, Gregory (Ava) Hopkins of North Prince George, VA; Brenda Richards of Tecumseh; David Johnston (Emma), Mike (Maryanne) Johnston, Shelly (Ed) Pyc; grandchildren, Shane Hopkins, Autumn Hopkins, Dante Jenkins, Jessica Bloomer, Cole Richards, Amber Johnston, Ash Johnston, and Jeremy Johnston; great-grandchildren, Drake Hopkins and Sierra Hopkins; brother, Clifford (Martha) Walker; and several nieces and nephews. She was preceded in death by her parents, her former husband, Elbert A. Johnston; daughter, Karen Johnston and very special companion, “Penny.” Per Beverly’s wishes, cremation will take place. A graveside service for Beverly will be held at a later date at Pleasant View Cemetery in Blissfield. Wagley Funeral Home, Tagsold Chapel, Blissfield has been entrusted with the arrangements. Memorial contributions in Beverly’s memory may be made to the American Cancer Society. Online condolences and memories may be shared at www.WagleyFuneralHomes.com.

The family of Beverly M. Johnston created this Life Tributes page to make it easy to share your memories.

Send flowers to the Johnston family.