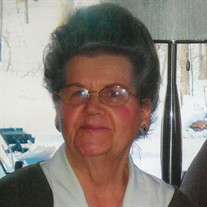 MANITOU BEACH – Beverley Aileen Snyr age 87 of Manitou Beach, died Wednesday afternoon, December 8, 2021 at home with her family by her side. Beverley was born on June 16, 1934 to Vaino “Vernon” and Inell W. (Sarkkila) Rautanen in Amasa, Michigan. She was born in the home of the local midwife, as was the tradition in their rural town. Beverley graduated from Crystal Falls High School with the Class of 1951. Henry John Snyr met Beverley and was smitten with her immediately, he especially liked how they both were raised in the country on farms. It took a little longer for Beverley, but Henry’s perseverance paid off and they were married on January 30, 1954, celebrating 66 years together before his death on November 9, 2020. Beverley worked with Henry as co-owners of Devil’s Lake Golf Course for many years. She was very organized and did a great job as the head bookkeeper. Her easy going and social personality was evident everywhere she went. Neighbors would often come to Beverley for words of wisdom or just to visit. Never one to pass up an opportunity to meet new people, Beverley took advantage of a traffic jam to dance with camper at a nearby campground. Henry looked on, chewing his Copenhagen, watching with a smirk while waiting patiently. Music was important to Beverley as she played the drums in her father’s band, during high school and later in life when her family surprised her with a new drum set. Beverley was a passionate reader and was well versed in so many areas, she especially liked to read about health and wellness. She loved showing her artistic talents in crocheting, painting and designing her own cards to share with others. One talent that her children all speak about is how Beverley had radar-like hearing. No matter if you were in another room whispering, Beverley would yell out her response to what was being discussed. This special talent stayed with Beverley to the very end of life. She immensely enjoyed her time with her grandchildren and great-grandchildren, teaching them all how to cuss in Finn and Polish fluently, even making “cussing” t-shirts. She showed them old-time dance steps, how to craft; and when they spent the night there was always laughter and many special snacks. Beverley is survived by her children, Joseph Henry Snyr, Kathleen (Mike) Alvarado and Tonya Renae Snyr (Steve Aldrich); grandchildren, Sadie (Zach) Oliver, Carly Snyr, Megan Peters and Heidi (Edward) Whitney; great-grandchildren, Kylee Peters and Dash Whitney; and brother, David Rautanen. She was preceded in death by her parents; husband, Henry; granddaughter, Jenna Alvarado; brother, Bernard Rautanen and sister-in-law, Charlotte Rautanen. All services are private and have been entrusted to Wagley Funeral Home, Adrian. A webcasting of the service will be available starting at 2 p.m. on Friday, December 17, 2021. Memorial contributions may be made to the Shriners Children’s Hospital. Online condolences and memories may be shared at www.WagleyFuneralHomes.com.

The family of Beverley Aileen Snyr created this Life Tributes page to make it easy to share your memories.

Send flowers to the Snyr family.