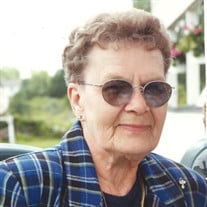 ADRIAN – Betty Jane Townsend, 90, of Adrian died early Monday morning, April 12, 2021 at Lenawee Medical Care Facility while under the care of Hospice of Lenawee. Born September 19, 1930 in Pontiac, she was one of four daughters born to Arthur and Mildred M. (Woodworth) Hassenzahl. Betty grew up in Pontiac and was a proud graduate of Pontiac High School. She attended Bob Jones University in South Carolina, prior to beginning her employment with General Motors. Betty retired from her position as an Assembler for the company in 1992, after 27 years of service. On April 30, 1955, Betty married Byron E. Townsend in Angola, IN. They shared over 38 years of marriage and memories until he preceded her in death in November of 1993. Betty was a faithful member of the Church of the Good Shephard; where she held many positions in the congregation, including custodial work. Betty had a heart for volunteering and caring for her neighbors; wherever a helping-hand was needed, she was there. She was an active member of the VFW Auxiliary and delivered for Meals on Wheels. In her spare time, Betty was an avid reader. Betty is survived by her four daughters, Pamela (Roger) Frederick of Adrian, Deborah (J.R.) Rumsey of Adrian, Kathy (Chuck) Clymer of Adrian, and Jane (Valerio) Villegas of Blissfield; nine grandchildren; many beloved great-grandchildren; one great-great grandchild and sisters, Mary Stoner and Margaret Dinius. In addition to her parents and her husband, Betty was preceded in death by her twin sister, Beverly Meyers; grandson, Robbie Pinter and great-grandson, Coty Pinter Funeral services for Betty will take place Thursday, April 15, 2021 at 12 p.m. at Wagley Funeral Home, Adrian, with Pastor CJ Clymer III officiating. Visitation will be from 11 a.m. until the time of the service. Following the Governor’s executive order, all attendees are required to wear a proper face covering, with the exception of those under the age of five years old or those who cannot medically tolerate. Burial will follow in Lenawee Hills Memorial Park Memorial contributions may be made to Hospice of Lenawee, the Lenawee Humane Society or New Life Church of Adrian. Online memories and condolences may be shared at www.WagleyFuneralHomes.com.

ADRIAN &#8211; Betty Jane Townsend, 90, of Adrian died early Monday morning, April 12, 2021 at Lenawee Medical Care Facility while under the care of Hospice of Lenawee. Born September 19, 1930 in Pontiac, she was one of four daughters born... View Obituary & Service Information

The family of Betty Jane Townsend created this Life Tributes page to make it easy to share your memories.

Send flowers to the Townsend family.