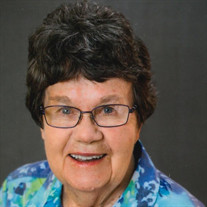 ADRIAN – Beth T. Murley, 92, of Adrian formerly of Lansing, died Tuesday afternoon April 27, 2021 at Brookdale of Adrian with her daughters by her side, while under the care of Hospice of Lenawee and the Brookdale staff. Born March 21, 1929 in Middlebush, NJ, she was the daughter of Ralph and Mabel (Stryker) Thomson. Following high school, Beth earned her Bachelor’s degree in Education from Hope College in Holland, MI. Beth was an Elementary School teacher, until she became a mother. She devoted and focused her life on her family. She later returned to teaching and taught adult education. Beth was known to be thoughtful and kind to everyone she met. Always calm and collected, she never raised her voice or became overly concerned in any situation. She loved helping people and volunteered her time and talents wherever needed. In her spare time, she enjoyed sewing, crafting, and playing Bridge. On June 25, 1954, she married Richard C. Murley in Middlebush, NJ. They shared over 56 years of marriage and memories together, until he preceded her in death on November 24, 2010. Beth and Richard loved to travel as a couple, especially to England to visit with family. They planned a special trip for each one of their grandchildren to a destination of their choice at the age of ten. Truly an unforgettable time for everyone. Beth is survived by her four children, Janice Murley of Adrian, Judy (Neil) Barker of Lockport, IL, Tom (Connie) Murley of West Chester, OH, and Brian Murley of Lansing; five grandchildren, Molly (T.J.) Davis, Joshua Murley, Gabriel Murley, Hayley Barker, and Claire Barker; and three great-grandsons, Declan Davis, Cooper Davis, and Everett Davis. In addition to her beloved husband, Richard, Beth was preceded in death by her brothers, Ken Thomson and Melvin Thomson. A memorial service for Beth will be held on Monday, July 19, 2021 at 11:00 a.m. at the Central United Methodist Church, 215 N. Capital Ave., Lansing, where she was a lifelong member. Wagley Funeral Home, Adrian has been entrusted with arrangements, where online memories and condolences may be shared at www.WagleyFuneralHomes.com. The family suggests that memorial contributions to honor Beth be made to Brookdale of Adrian, Hospice of Lenawee, Central United Methodist Church in Lansing, or the Parkinson’s Foundation.

ADRIAN &#8211; Beth T. Murley, 92, of Adrian formerly of Lansing, died Tuesday afternoon April 27, 2021 at Brookdale of Adrian with her daughters by her side, while under the care of Hospice of Lenawee and the Brookdale staff. Born March 21,... View Obituary & Service Information

The family of Beth T. Murley created this Life Tributes page to make it easy to share your memories.

Send flowers to the Murley family.