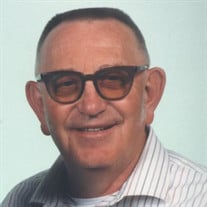 FAIRFIELD- Benjamin D. Carpenter, age 82, of Fairfield, passed away on Friday, December 4, 2020. He was born on April 27, 1938, to John and Florence (Commers) Carpenter in Hudson, MI. A graduate of Sand Creek High School with the Class of 1956, Ben went on to attend Michigan State University where he graduated with a degree in Agriculture. On November 26, 1959, Ben married Bonnie Lee Runals; having just celebrated their 61st wedding anniversary. Ben served in the United States Army where he was stationed in Germany. Family was very important to Ben; and you could count on him to be one of the first parents sitting in the bleachers to watch his children and later grandchildren, play in the band or participate in a sporting event. His one-liners and jokes had his children rolling their eyes and their friends laughing. Farming has always been a part of Ben’s life; he has especially enjoyed farming with his nephews, Matt and Jake Carpenter, over the last twenty years. Ben retired from Tecumseh Products after thirty years. During the summer months, Ben and Bonnie would often go to various Steam Engine shows, as he was a member of the National Threshers Association for over fifty years. He looked forward to each show; and no matter what the weather was like, it was a great day when the steam engines were running. Ben was a member of Fairfield Baptist Church for many years and treasured his friendship with Rev. Lloyd Jewett. Later in life, Ben decided to embrace traveling as he and Bonnie ventured to Hawaii multiple times, Florida in the winter season, and cruising whenever he got a good bargain. Ben is survived by his loving wife Bonnie; children, Betty Jo (Andy) Zenk of Jasper and Brian Carpenter (Doug Reed) of Toledo, OH; grandchildren, Ryan Zenk, Alex Zenk, PFC. Nick Zenk and Kathryn Zenk; brother, Wayne (Cecilia) Carpenter; and many nieces and nephews. He was preceded in death by his parents and nephew, Bruce Carpenter. All services are private at this time and have been entrusted to Wagley Funeral Home, Adrian. Burial will take place at Fairfield Cemetery. A Celebration of Life will be held later in the Spring of 2021. A recording of the service will be accessible from Ben’s tribute wall Wednesday afternoon at www.WagleyFuneralHome.com, where a link to view the recording will be available for 90 days. Online memories and condolences may be shared at www.WagleyFuneralHomes.com

FAIRFIELD- Benjamin D. Carpenter, age 82, of Fairfield, passed away on Friday, December 4, 2020. He was born on April 27, 1938, to John and Florence (Commers) Carpenter in Hudson, MI. A graduate of Sand Creek High School with the Class... View Obituary & Service Information

The family of Benjamin D. Carpenter created this Life Tributes page to make it easy to share your memories.

Send flowers to the Carpenter family.