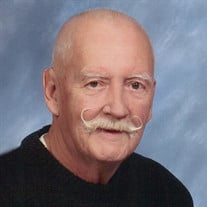 BOWLING GREEN, OH – Benedict “Ben” Slomski, age 83 of Perrysburg, formerly of Adrian and Blissfield, passed away Saturday, March 25, 2017, at Bridge Hospice Care Center in Bowling Green. He was born May 27, 1933 in Chicago, IL to Benedict and Helen (Bade) Slomski. Ben was very proud of his service to our country in both the U. S. Army during the Korean Conflict, and later in the U. S. Coast Guard Reserves. On May 27, 1978, he married Mary Kathleen “Kathy” Jacobs-Dusa, and they were blessed with over 38 years together. Ben was a former member of Ogden Church and a current member of Rossford United Methodist Church. He retired from Madison Machine with 20 years of service and also from Signal 88 where he worked as a security guard at the Adrian Dominican Motherhouse. Favorite pastimes included gardening, making bird houses and feeders, and bird watching. He was a Past Commander and life member of American Legion Post #325 in Blissfield and a life member of Palmyra Masonic Lodge #184. Ben was a Boy Scout scoutmaster for 30 years and also served on the Blissfield Village Council. In addition to his wife, Kathy, he is survived by their children: Kurt (Suzanne) Slomski, Renee (Tom) Spotts, Mark (Terri) Slomski, Scott (Lori) Slomski, Brad (Tracy) Slomski, Carl (Sonya) Slomski, Dale (Denise) Slomski, Brenda (Al) Weis, Lori (Greg) Reihing, Robert (Laurie) Dusa and Mark (Jodi) Dusa; 34 grandchildren; 19 great grandchildren; his brothers, Raymond Slomski and Ronald (Jackie) Slomski; and his former wife, Julie Law In addition to his parents he was preceded in death by his step-father, Carl Konsoer, and two grandchildren. Funeral services will take place at 7 p.m., Thursday, March 30, 2017 at Wagley Funeral Home, Tagsold Chapel in Blissfield with Rev. Dr. Robert Ball officiating. Visitation will be held at the funeral home Thursday from 1 to 3 p.m. and 5 p.m. until the service. In lieu of flowers, memorial contributions are suggested to Bridge Hospice, Blissfield Boy Scouts or Rossford United Methodist Church. Online condolences and memories may be shared at www.WagleyFuneralHomes.com.

The family of Benedict "Ben" Slomski created this Life Tributes page to make it easy to share your memories.

Send flowers to the Slomski family.