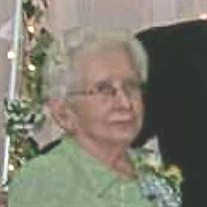 SWANTON, OH- Barbara Jean Swift, age 87, formerly of Adrian passed away on Thursday, September 20, 2018, at Swanton Valley Center. Barb was born on August 15, 1931, to Elmer and Helen (Fick) Young, at her grandparents’ home in Palmyra Township. She was a graduate of Blissfield High School and went on to attend Cleary Business College. On March 22, 1951, she married Wayne Swift and they shared 54 years together before his passing in 2005. Barb worked as a bookkeeper for Spiegel Catalog, Western Auto in Blissfield and Swanton, and at Paul’s Flower Shop in Swanton. Wayne and Barb managed numerous Motel 6’s over the years, with the last location being in Toledo, Ohio before they retired. She was a member of St. Paul’s Lutheran Church in Blissfield. Barb enjoyed playing bingo, word searches and watching her beloved Detroit Tigers. She is survived by her children, Rebecca Swift of Adrian, Randi (Horst) Wudi of Wauseon, OH, and Bill (Kathie) Swift of Jackson; 4 grandchildren and 6 great-grandchildren; siblings, Marilyn Cheney of Blissfield, Marcella Young of Blissfield and Darlene (Ronald) Marks of Columbus, OH. Barb was preceded in death by her parents, husband Wayne, and grandson, Joshua Swift. A memorial service for Barb will be held at 11 a.m. on Monday, September 24, 2018, at St. Paul’s Lutheran Church in Blissfield with Pastor Gary Leking officiating. Visitation will be at 10 a.m. until the time of the service. All arrangements have been entrusted to Wagley Funeral Home Tagsold Chapel. Memorial contributions may be made to Great Lakes Hospice. Online condolences and memories may be shared at www.wagleyfuneralhomes.com.

The family of Barbara Jean Swift created this Life Tributes page to make it easy to share your memories.

Send flowers to the Swift family.