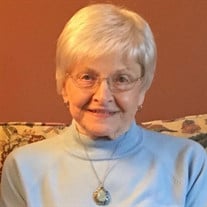 ADRIAN – Barbara J. Lowery, age 91 of Adrian, passed away Tuesday, December 26, 2017 at her home under the care of her family and Hospice of Lenawee. She was born November 9, 1926, in Holloway, Michigan, to Edward and Ruth (Stradling) DeGroot, and graduated from Adrian High School with the Class of 1944. On March 7, 1948, she married Virgil Lowery, Jr., in Holloway, and they celebrated 55 years of marriage before his death in 2003. Barbara worked in several offices in the area before she started at Fisher Body, where she retired with many years of service. She was a faithful member of the Raisin Presbyterian Church in Holloway her entire life. Barbara was also a member of the UAW and active at the Adrian Senior Center. She was known for her giving spirit, and eagerness to help others. Barbara was a great cookie maker who also enjoyed camping and sitting around a campfire with her family. She is survived by two daughters, Rebecca (Greg) Goodyear of La Palma, CA, and Marsha (John) Philbrook of Manchester, MI; grandchildren, Joel Goodyear, Megan (Duane) Lovett, Christopher (Ashley) Goodyear and Eric (Meghan) Heath; three great grandchildren; a sister, Phyllis Palmer of Philipsburg, PA and cousin, Lawrence Kopke of Britton, MI. In addition to her parents and husband, she was preceded in death by her daughter, Karen Heath, son-in-law, Jeff Heath, and brother, Robert DeGroot. Funeral services will take place at 1:30 p.m., Saturday, December 30, 2017, at Wagley Funeral Home with Rev. Linda Farley officiating. Burial will follow at Lenawee Hills Memorial Park. Visitation will be held at the funeral home Friday from 4 to 7 p.m. The family would like to express a heartfelt thank you to Hospice of Lenawee for their amazing care and support. Contributions in memory of Barbara are suggested to Hospice of Lenawee or Adrian Senior Center. Online condolences and memories may be shared at www.WagleyFuneralHomes.com.

ADRIAN &#8211; Barbara J. Lowery, age 91 of Adrian, passed away Tuesday, December 26, 2017 at her home under the care of her family and Hospice of Lenawee. She was born November 9, 1926, in Holloway, Michigan, to Edward and Ruth (Stradling)... View Obituary & Service Information

The family of Barbara Jean Lowery created this Life Tributes page to make it easy to share your memories.

Send flowers to the Lowery family.