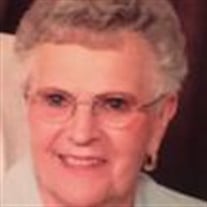 TECUMSEH—Barbara Jean Jackson, age 90 formerly of Blissfield, passed away April 13, 2017 at Tecumseh Place II , under the loving care of her family and Hospice of Lenawee. Barbara was born June 16, 1926, in Blissfield, MI to Palmer and Donna (Haas) Saxton. Barbara graduated with the Blissfield High School Class of 1944. On April 6, 1946, she married Clifford Henry Jackson in Blissfield, MI. They celebrated 62 years of marriage before his death in November 2008. Barbara worked for a short time as a hair stylist before she became busy raising her family. She belonged to the First Presbyterian Church of Blissfield, Eastern Star and the Women’s Association of the Presbyterian Church. Barbara was always volunteering at church functions and was well known for making delicious pies for many events. Blissfield pride ran deep in Barbara’s life and she loved going to her children and grandchildren’s sporting events and activities. She loved vacationing at the Hiawatha Sportsman’s Club in the Upper Peninsula, going to Fort Myers, Florida, and weekends at the family pond. She also enjoyed reading books on History. Survivors include her children, Sharon (Doug) Hickman, Linda (Dennis) Thompson and Greg (Wetonia) Jackson, all of Blissfield; grandchildren, Jeffrey (Sue) Thompson, Eric (Erin) Thompson, Elizabeth Jackson and Thomas Jackson; great- grandchildren, Austin Thompson and Mallory Thompson; and close family Scott, Bonnie, Jessie and Jolie Langmeyer. In addition to her husband, Clifford, Barbara was preceded in death by her parents and granddaughter, Lisa Thompson. The family would like to thank the staff at Tecumseh Place II for all their love and care they showed Barbara over the last seven years. A Memorial service will take place at 12 pm Thursday, April 27, 2017 at the Blissfield Presbyterian Church, with Rev. Douglas Holmes officiating. The family will receive friends one hour prior to services at the church. Interment will be at 10 am Thursday, April 27, 2017, at Pleasant View Cemetery in Blissfield. Memorial contributions may be made to Blissfield Presbyterian Church or Hospice of Lenawee; envelopes will be available at the church. Arrangements have been entrusted to Wagley Funeral Home, Tagsold Chapel where online condolences and memories may be shared at www.WagleyFuneralHomes.com.

TECUMSEH&#8212;Barbara Jean Jackson, age 90 formerly of Blissfield, passed away April 13, 2017 at Tecumseh Place II , under the loving care of her family and Hospice of Lenawee. Barbara was born June 16, 1926, in Blissfield, MI to Palmer and... View Obituary & Service Information

The family of Barbara Jean Jackson created this Life Tributes page to make it easy to share your memories.

Send flowers to the Jackson family.