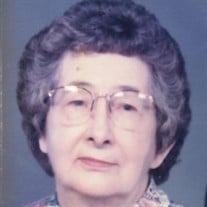 ADRIAN – Barbara Jean Evans, 99, of Adrian, formerly of Tipton, passed away Friday evening, August 27, 2021, at Lenawee Medical Care Facility under the care of Hospice of Lenawee and with family at her side. She was born June 12, 1922 to Elwood L. and Mildred M. (Sisson) Knapp in Adrian. She graduated with the Adrian High School Class of 1940. After graduation she began working at the Agricultural Office in the basement of the County Court House. It was there that she met her future husband, Maurice Evans. Several months later on August 9, 1946 they were married at Barbara’s home in Sand Creek. They cherished over 57 years of marriage and memories together until he preceded her in death in 2003. After they were married, the couple moved to Tipton to the family farm. There she proudly raised her five children. The family later returned to the Adrian area, where she worked as treasurer for various employers, including the County Treasurer’s Office. Barbara formally retired in 1975 as Deputy Treasurer for Lenawee County. Barbara and Maurice spent many retirement years in Tipton until he passed away. She was also a member of the Tipton Community Church. Her greatest joy in life was her family. Throughout her lifetime, Barbara loved caring for and playing with her grandchildren & great-grandchildren. She enjoyed horses and harness racing with her family, meeting new people who became good friends, and travelling. Her most memorable trip was cross country from San Diego to Boston with a grandson. In her spare time, she enjoyed bird watching, lunches with fellow Adrian High School classmates, completing jigsaw puzzles, and playing cards; especially Euchre and the nightly games of Skip-Bo. Barbara is survived by her five children, Nancy (Ronald) Whitford of Adrian, Jim (Corlene) Evans of Tipton, Shirley (Jack) Metternick of Onsted, Darrell (Sa) Evans of Rockport, TX, and Scott (Connie) Evans of Jackson; 9 grandchildren; 12 great-grandchildren; and two nieces. In addition to her parents, and beloved husband, Maurice, she was preceded in death by her granddaughter, Jennifer Evans; brother, Richard Knapp; sisters, Virginia Knapp (in infancy) and Florence Knapp; and mother-in-law, Leota Evans. A funeral service for Barbara will be held on Wednesday, September 1, 2021 at 1:00 p.m. at Wagley Funeral Home, Adrian with Pastor Debi Humphreys officiating. Burial will follow at Franklin Cemetery in Tipton. Visitation will take place on Wednesday at 11:00 a.m. and continue until the time of the service. To honor Barbara’s memory, the family suggests that memorial contributions her name be made to Hospice of Lenawee or The Kellogg Eye Center in Ann Arbor. Online condolences and memories may be shared at www.WagleyFuneralHomes.com.

ADRIAN &#8211; Barbara Jean Evans, 99, of Adrian, formerly of Tipton, passed away Friday evening, August 27, 2021, at Lenawee Medical Care Facility under the care of Hospice of Lenawee and with family at her side. She was born June 12, 1922... View Obituary & Service Information

The family of Barbara Jean Evans created this Life Tributes page to make it easy to share your memories.

Send flowers to the Evans family.