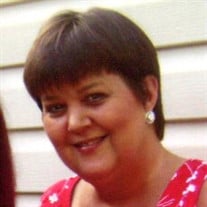 Blissfield – Barbara Cambal, age 55 of Blissfield, passed away Wednesday, May 16, 2018, at her home. She was born January 4, 1963, in Adrian, Michigan to Patricia (Nighswander) and Thomas Mallory. After graduating from Blissfield High School, she went on to attend Western Michigan University. On July 1, 2000, she married Ronald Cambal, and he survives. Barbara worked for several companies including, Bohn Aluminum, Libbey Glass, University of Michigan and most recently, the First United Methodist Church in Blissfield where she was a member. She was also a member of the Ag Society at the Lenawee County Fair. Barbara was an avid Detroit Tiger fan and loved playing bunko with her friends. In addition to her husband, Ron, she is survived by her parents, Patricia Tagsold and Thomas (Phyllis) Mallory; her sons, David (Elizabeth) Hueter, Michael (Jenny Breier) Tiede, and Eric Tiede; grandsons, Tommy and Marc Hueter and Max Tiede; brother, Brian (Denise) Mallory; step-siblings, Douglas (Diane) Tagsold, Linda Cantrell, Jeffrey (Laura ) Tagsold, Gary (Lori) Coomer, Jodi (Brandon) Gleckler, and Lori (Ronald) Welty; her mother-in-law, Sharon Cambal; and a special cousin, Kaye MaRous. She was preceded in death by her sister, Connie Nine; step-father, Parker Tagsold; and father-in-law, Edward Cambal . Funeral services will take place at 11a.m., Monday, May 21, at Wagley Funeral Home, Tagsold Chapel in Blissfield with Rev. Kristen Coristine officiating. Burial will follow at Riga Cemetery. Visitation will be held at the funeral home Sunday from 1 to 8 p.m. Contributions in memory of Barb are suggested to the family. Online condolences and memories may be shared at www.WagleyFuneralHomes.com.

Blissfield &#8211; Barbara Cambal, age 55 of Blissfield, passed away Wednesday, May 16, 2018, at her home. She was born January 4, 1963, in Adrian, Michigan to Patricia (Nighswander) and Thomas Mallory. After graduating from Blissfield High... View Obituary & Service Information

The family of Barbara A. Cambal created this Life Tributes page to make it easy to share your memories.

Send flowers to the Cambal family.