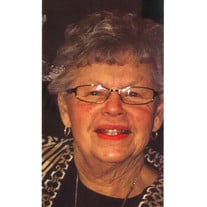 BLISSFIELD – Barbara A. Bliesner, 85 of Blissfield, passed away Saturday, October 10, 2020, at Flower Hospital in Sylvania, Ohio. She was born to Harold and Ester (Jones) Billington, February 8, 1935, in Blissfield. On December 31, 1952, she married Emerson Bliesner. They had cherished 61 years of marriage before his passing in 2014. She was a beloved wife, mom, daughter, sister and grandma. She was a dedicated teacher who taught for over 30 years at Blissfield Elementary School. Barbara was a lifetime member of St. John’s Lutheran Church, Riga. She enjoyed playing cards with her friends. Her most cherished times were the times she spent with her grandchildren. Survivors include her daughter, Diane (Ray) Bihn, her son, Thomas (Rachell) Bliesner, one brother, Robert (Karen) Billington; four grandchildren, Mackenzie and Sydney Bihn and Kip and Kash Bliesner. In addition to her husband Emerson, she was preceded in death by her parents, and a daughter, Deborah Bliesner Frederick. Services for Barbara will be 11 a.m., Thursday, October 15, 2020 at Wagley Funeral Home, Tagsold Chapel, Blissfield with the Rev. Justin Shrum officiating. Burial will follow at Pleasant View Cemetery. The family will receive friends on Wednesday, October 14 from 4 to 7 p.m. at the funeral home. Memorial contributions may be made to St. John’s Evangelical Church or Northwest Ohio Hospice, envelopes will be available at the funeral home. Following the Governor’s executive order, all attendees are required to wear a proper face covering, with the exception of those under the age of five years old or those who cannot medically tolerate. Online memories and condolences may be shared at www.WagleyFuneralHomes.com

The family of Barbara A. Bliesner created this Life Tributes page to make it easy to share your memories.

BLISSFIELD – Barbara A. Bliesner, 85 of Blissfield, passed away...

Send flowers to the Bliesner family.