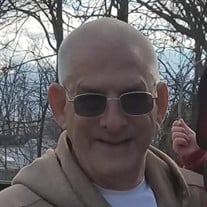 ADRIAN – Anthony “Tony” J. Morbach, age 65 of Adrian, passed away Sunday, December 3, 2017. He was born July 3, 1952, in Omaha, Nebraska, the oldest of the ten children of Donald and Margaret (Miller) Morbach. Tony graduated from Cooley High School in Detroit, and served his country in the United States Air Force. Tony owned and operated Personal Touch Painting, LLC in Adrian. Through this business he provided contracted services to both residential and commercial clients, making many friends over the years. In addition to his mother, Margaret “Mickey” Morbach of Troy, he is survived by three sons, Mark of Adrian, Scott (Lisa) of Merrillville, IN, and Mike of Jasper; treasured grandchildren, Jazmen, Selena, Connor and Samuel; and siblings, Terrence, Timothy, Thomas, Theodore, Theresa Angott, Tina Nagaitis and Tamara White. Besides his father, he was preceded in death by brothers, Todd and Tobin. All services for Tony will be private. Contributions in memory of Tony are suggested to Hospice of Lenawee, 1903 Wolf Creek Highway, Adrian, MI 49221 or Lenawee County Department on Aging, 1040 South Winter Street, Suite 3003, Adrian, Michigan 49221. Arrangements have been entrusted to Wagley Funeral Home where online condolences and memories may be shared at www.WagleyFuneralHomes.com.

The family of Anthony "Tony" Morbach created this Life Tributes page to make it easy to share your memories.

Send flowers to the Morbach family.