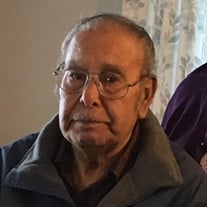 ADRIAN- Anthony “Tony” Martinez, age 90 of Adrian, formerly of Blissfield, passed away Thursday, November 30, 2017 at Lynwood Manor. He was born March 9, 1927, in Galesburg, Illinois, the oldest child of Raymond and Mary (Navarro) Martinez. He married Elena Sanchez in 1951 and she preceded him in death in 1988. On June 27, 1992, he married Maria Soto, and she survives. For most of his life, Tony resided in Blissfield. He retired from Smith Douglas Fertilizaer in Riga, which later became Borden Chemical. Tony was a faithful member of Iglesia Cristiana Bautista in Adrian. He was a very giving man who went on mission trip to Mexico to help others. In addition to Maria, his wife of 25 years, he is survived by his daughters, Teresa (Abner) Trivino of Adrian and Stella (Steve) Munoz of California; 3 grandchildren and 8 great grandchildren; Maria’s children, Simon, Felipe, Daniel (Barb) Villareal, all of Adrian, Irene (Tony) Martinez, Jose Villareal, both of Adrian, Christina Callahan of Florida and Frank (Mary) Villareal of Columbus, OH; her 17 grandchildren, and 15 great grandchildren; and his siblings, Jim Martinez of Onsted and Lydia (Felipe) Guzman of Blissfield. In addition to his first wife, Elena, he was preceded in death by a daughter, Beatrice, son, Ernest and siblings, Louisa Valdez, Henry, Raymond, David and Paul Martinez. Funeral services will take place at 2 p.m., Monday, December 4, 2017 at Wagley Funeral Home, Tagsold Chapel in Blissfield with Pastor Ralph Vallejo officiating. Burial will follow at Pleasant View Cemetery. Visitation will be held at the funeral home Monday from 11 a.m. until the service at 2 p.m. Online condolences and memories may be shared at www.WagleyFuneralHomes.com.

The family of Anthony "Tony" Martinez created this Life Tributes page to make it easy to share your memories.

Send flowers to the Martinez family.