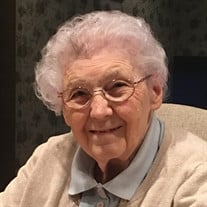 BLISSFIELD – Anna Elsie Berk, 92, left her earthly life on February 23, 2019, and entered fully into eternal life with Jesus, her Lord and Savior. Elsie, as she was known to all, was born on April 14, 1926, to Karl and Anna Marie Mundinger in Worth Township, IL. Shortly thereafter, the family moved to Canton, IL. A 1943 Canton High School graduate, she worked at army Camp Ellis, IL, before entering college. Graduating from Taylor University in 1948 with summa cum laude honor, she taught school for two years at Canyonville Bible Academy in Oregon. Returning to Illinois, she entered the Canton Hospital School of Nursing. After receiving her RN, and because of her expertise and teaching gifts, she became a Nursing Arts Instructor at the Canton nursing school. She married Harold Berk on August 7, 1954. After a brief honeymoon, they became missionaries with the Mission Aviation Fellowship and left for Brazil in 1955. After 13 years of ministry in Brazil, they returned to Blissfield in 1968 to care for Harold’s parents and her mother. Wanting to help the family as well as others, she made a choice between nursing and teaching. Realizing she could be home when her children were, she chose teaching at the Blissfield Middle School, eventually earning a Master’s degree in Education from Toledo University. The results of this decision have been profound. Not only has she contributed to her family in so many ways, but also so many of her students remember her as the teacher who loved and respected them and wanted the best for each one. To this day, her students continue to express their appreciation for what she has meant to their lives. To her family and to everyone who has known her, she always put others first and herself second. As she was in life, so also may her memory be a blessing. Elsie’s father and mother, brothers Karl, George, Henry, and sister Elfrieda preceded her in death. She is survived by her husband Harold and four children: Dalinda (Clarke) Reese, Dianne (Ric) Iagulli, Cindy (Mike) Libby, and Elaine (Rick) Brown. Fifteen grandchildren: twins David and Michael, and Sarah Reese; Nic and Kristi Iagulli; Bradley, Jonathan, Leanna, Katie, Kayla and Ellie Libby; and Nathan, twins Rachel and Renee, and Ryan Brown. Six great grandchildren: Madison, Logan, and Jackson Reese; twins Reggie and Cassidy, and Waverly Iagulli. Funeral services will take place at 11 a.m., Friday, March 1, 2019, Elem3nt Church in Blissfield with Rev. Keith Smith officiating. Burial will follow at Pleasant View Cemetery. Visitation will be held at Wagley Funeral Home, Tagsold Chapel in Blissfield Thursday from 4 to 8 p.m. Online condolences and memories may be shared at www.WagleyFuneralHomes.com.

BLISSFIELD &#8211; Anna Elsie Berk, 92, left her earthly life on February 23, 2019, and entered fully into eternal life with Jesus, her Lord and Savior. Elsie, as she was known to all, was born on April 14, 1926, to Karl and Anna Marie Mundinger... View Obituary & Service Information

The family of Anna Elsie Berk created this Life Tributes page to make it easy to share your memories.

Send flowers to the Berk family.