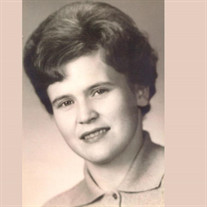 ADRIAN – Alwine Cooper, 84, of Adrian, formerly of Blissfield, died Saturday, November 20, 2021, at Gaslight Village Assisted Living in Adrian. She was born October 5, 1937, in Rodomsko, Poland, to Gustav and Martha (Weiss) Kisser. Alwine grew up in Germany and went to school through the eight grade which was the standard. She learned at early age that life was tough, and you had to know how to work to survive. After school Alwine went to work at the United States Army base in Germany, where she worked at the Post Exchange, also known as the PX. It was during her time at the PX that Alwine met her future husband, Ira Cooper. Alwine married Sgt. Ira C. Cooper on April 20, 1964, in Bad Kreuznach, Germany, and they were blessed with almost 54 years together before his death on March 24, 2018. Even though Ira held the title Sargent, Alwine was the family CEO, holding the family together and making sure everything kept running while Ira was busy in the Army. Alwine liked things to be in order and this was easily seen in the way she kept her yard and home in meticulous condition. Alwine is survived by her three children, Michael (Sue) Cooper of Maybee, MI, Kurt Cooper (Karen Marksbury) and Tina (Marty) Nine of Blissfield; grandchildren, Jessica (Allen) Hall, Brittney Cooper, Kayla (Jake) Graf, Jarred Cooper (Fancey Teneyck), Courtney Kimerer, and Katie Nine; and great grandchildren: Olivia, Avery, Cooper, Ryan, Quincy and Ryder. She was preceded in death by her husband. The family would like to thank Elara Caring Hospice for their care and support with Alwine. A funeral service will take place on Friday, November 26, 2021 at 3:00 p.m., at the Wagley Funeral Home, Adrian, with Rev. Larry Betz officiating. Visitation will be held from 1:00 p.m. until the time of the service. Private interment will take place at a later date in Oakwood Cemetery in Adrian. Online condolences and memories may be shared at www.WagleyFuneralHomes.com.

The family of Alwine Cooper created this Life Tributes page to make it easy to share your memories.

Send flowers to the Cooper family.