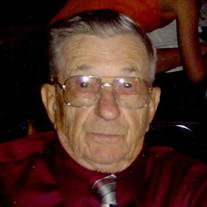 ADRIAN – Allen F. Kern, age 95 of Adrian, passed away Monday, January 7, 2019. He was born September 28, 1923, in Adrian, Michigan, the only son of Clarence and Anna (Rudisiler) Kern, and graduated with the Adrian High School Class of 1941. Allen was a decorated World War II United States Army veteran who served in Normandy, and was part of the D-Day invasion. On November 2, 1947, he married Florence Spreeman, and they were blessed with over 71 years together. Allen was an electrician with the IBEW Local 8 in Toledo for 31 years, and an electrical inspector for the City of Adrian and area townships for 26 years. He served as a trustee of St. Stephen Evangelical Lutheran Church, where he was a life-time member. He was also a trustee for Kilarney Lutheran Camp. He was a life member of the VFW Annis-Fint Post #1584 where he was a member of the honor guard, and DAV; a former member and past officer of the Irish Hills Antique Automobile Club of America; a past member of the Adrian Electrical Exam Board and a former advisor at Vo-Tech. In addition to his wife, Florence, he is survived by their two sons, David Kern of Tecumseh and Daniel and Sheri Kern of Adrian; a sister, Ethel McKie of Adrian; and several extended family members. He was preceded in death by a sister, Mabel Kehl. Funeral services will take place at 11 a.m., Monday, January 14, 2019 at Wagley Funeral Home with Pastor Brian Keller officiating and military honors conducted by VFW Annis-Fint Post #1584 and American Legion Post #97. Burial will follow at Franklin Cemetery, Tipton, Michigan. Visitation will be held at the funeral home Sunday from 12:30 to 2:30. Memorial contributions are suggested to Wounded Warriors. Online condolences and memories may be shared at www.WagleyFuneralHomes.com.

ADRIAN &#8211; Allen F. Kern, age 95 of Adrian, passed away Monday, January 7, 2019. He was born September 28, 1923, in Adrian, Michigan, the only son of Clarence and Anna (Rudisiler) Kern, and graduated with the Adrian High School Class of... View Obituary & Service Information

The family of Allen F. Kern created this Life Tributes page to make it easy to share your memories.

Send flowers to the Kern family.